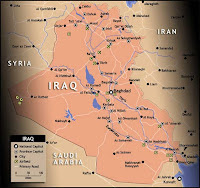 The following is taken from Associated Press - MSNBC - Reuters reports


American forces were drawn deeper into Iraq’s crackdown on Shiite militants today as Coalition Forces launched air strikes on Basra for the first time since 2003, as well as battling Al-Sadr's paramilitary forces in Baghdad.

Iraqi Army forces, despute years of training and billions of dollars invested, are unable to drive Al-Sadr's militia out of Basra.

The campaign to rid Basra of it's growing cadre of Shia religious zealots, gangsters, and Shia militias supported by Iran, s a major test for al-Maliki and for the Iraqi military and security forces.

Defense Minister Abdel Qader Jassim acknowledged at a news conference in Basra that Iraqi security forces had been caught off-guard by the strength of the opposition.
"We supposed that this operation would be a normal operation, but we were surprised by this resistance and have been obliged to change our plans and our tactics," he said.

President Bush's "Surge" strategy hinges on the ability of Iraqi Security Forces (Army & Police), as well as Government of Iraq leaders like Prime Minister Maleki to control situations like this. This is the first serious test for the ISF to control their own cities, and it appears that they are not up to the challenge.


The Washington Post reported this morning that U.S. troops appeared to be taking the lead in the fighting in the Baghdad slum of Sadr City, with Iraqi army and police units largely remaining on the outskirts. A Post reporter said four U.S. Stryker armored vehicles rumbled through Sadr City, one of them engaging militiamen with the Mahdi Army, which is loyal to al-Sadr, with heavy fire. The Post also said that American forces were involved in about a dozen gun battles on Thursday in Baghdad, with the fighting spread in six districts.

The main Shia bloc of legislators in the Iraqi Parliement refused to call for a special session, saying correctly that the fighting in Basra was a law & order issue, and it's outcome could not be legislated.

The performance of the ISF could well determine American hopes of reducing troop levels in Iraq. Both President Bush and Gen Petraeus have called for a halt to reducing American troop strength this summer, leaving the 8,000 more troops in-country than when the Surge began. With the Joint Chiefs telling President Bush yesterday that the continued "op-tempo" is badly stressing the Army and Marine Corps (as well as the other 2 services to a far lesser degree), it is more important than ever that the ISF need to take control of Basra quickly.
Posted by Andrew Lubin at 12:14 PM

Get real - you think the IA's are going to go door-to-door like the Marines did in An-Nasiriyah and Fallujah? Not likely.

Jon's right; I can't see the IA's going out on night calls. And for the GOI minister to say they were caught unaware - so their Intel ability is as bad as their fighting ability?

We should just leave and let them kill each other off.

It's a shame to see how poorly the Iraqi's perform after the 4,000 lives and several hundreds of billion dollars we've poured into that rathole country. Maybe it's time to reconsider.

For better or worse it would seem that the heart of the matter is going to be decided. The ISF have to stand up and hold on to THEIR country. This was only a matter of time. Now we'll see. Remember, even Washington needed Lafayette to win the Revolutionary War.