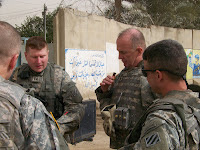 CAMP VICTORY, Iraq – Operation Marne Rugged started March 15 in the area southeast of Arab Jabour and Salman Pak, south of the Tigris River. The operation will establish support for local Iraqi communities seeking security against al-Qaeda in Iraq and various criminal forces seeking to take advantage of the lack of GOI influence.

The goal of Marne Rugged is to provide lasting security to the region by controlling the approaches to Arab Jabour, Salman Pak and Baghdad. Headed by Iraqi Security Forces with Coalition support, the operation will focus on controlling an area of the Tigris River valley to disrupt the remaining criminal and AQI elements. Control of the territory is currently difficult due to the terrain, threat of improvised explosive devices and poor condition of canals and bridges.

The ISF, will lead most of the ground missions and will receive support from a Task force Marne MiTT's Team. The 4th Brigade Combat Team, 3rd Infantry Division will participate in clearance operations and provide support as needed. Marne Rugged will also establish a new patrol base to command river crossings and control peninsulas created by bends in the river.

The goal of Operation Marne Rugged is to eliminate remaining extremists and rebuild the domestic infrstructure.

On the heels of Operations Marne Thunderbolt and Grand Slam south of Baghdad, the soldiers of Task Force Marne will push further south to squeeze extremists during Operation Marne Rugged. The operation will cover a rural area southeast of Baghdad, south of the Tigris River in the area of operation of 4th Brigade Combat Team, 3rd Infantry Division and 3rd Brigade, 8th Iraqi Army.

One phase of the operation will be the establishment of Patrol Base Summers, a joint Iraqi Army and Coalition forces base. It is named for SSGT Vincent Summers (2nd Battalion, 69th Armor Regiment) who was killed during Operation Iraqi Freedom III.
“We have found that when we put Iraqi Army and Coalition forces in a patrol base in an area like Summers, the population comes to us and gives us that refined intelligence, so that we can do precise operations against any al-Qaeda that may be in this area,” said Col. Tom James, commander of 4th BCT, during a pre-operation briefing at Forward Operating Base Zulu given last week.

In addition to establishing the patrol base and eliminating al-Qaeda and any other extremists, Marne Rugged will focus on capacity building. In anticipation of the operation, the Coalition and IA have already identified approximately 2,500 Iraqi security volunteers who are eager to transition into Sons of Iraq in the short-term and into Iraqi Security Forces in the long-term. “We see two major tasks that we have to accomplish: One, we have to integrate the Iraqi security volunteers,” James said. “The other is to provide quick-impact, small projects to the local civilians.”
Col. Ali Abdul Hussein, commander of 3/8 IA, also cited the importance of local projects, in particular repairing water pumps that he said were damaged by terrorists. Operable water pumps are of vital importance to this agricultural area as the pumps are used to push water thru the extensive levee and canal system.
Posted by Andrew Lubin at 8:04 AM

The surge is working because we're letting our troops work. Keep the politics out of the equation and fight the war. Good reporting, Andrew. God speed.