Marine Leadership on the Afgan-Pak border 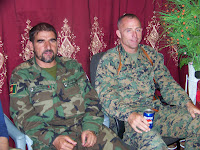 FOB Joyce. Part of being a Marine officer is looking after one's Marines, and in last last few weeks in-country, Col Jeff Haynes has been out in the boonies doing just that.

Haynes is the commanding officer of Embedded Training Team 3-5 (ETT); a unit made up of Marines, Army, National Guard, and Navy that has been mentoring the Afghan National Army's 201st Corps. Theirs is more than just a purely military mission; they provide a 'muscular mentoring' that has them teaching their Afghan counterparts the fine points of being a Sgt Maj or a Captain, as well as going out in the field with them during operations. Hayne's goal is to do far more than putting an "Afghan face" on the war; he's trying to teach the Afghan's 201st Corps how to conduct operations on their own...when the Afghan people see the Afghan Army fighting independely, they'll have more confidence in the Afghan government. But now ETT 3-5's time in Afghanistan is coming to an end, and Haynes is travelling out to visit his Marines and soldiers one more time.

We helo'd out to Jalalabad, from where we moved to FOB Hughie. The BlackHawk reduced a multiple-hour drive to one of the most amazing 20-minute helicopter rides ever experienced as the scenery changes abruptly from the stark moon-like mountain ranges and deserts to a brilliant green agricultural area.

With Jalalabad having a major airport, FOB Hughie has become the headquarters hub for the American bases in this part of Afghanistan. In the past months Haynes has spent considerable time and effort pushing his forces north along the Afghan-Pak border into the smaller FOBS and COPS (combat outposts) where groups as small as 2-3 Marines mentor the ANA and assist the Army in these remote areas. It was in one of these little bases in June where three of Hayne's Marines rallied the Army defenses in the vicious fight at Wanat (24 Army KIA, with 1 Marine nominated for the Silver Star and 1 for the Bronze), and Haynes wanted to see as many bases as possible. The plan was to convoy-up to Asadabad, then over to Camp Blessing, and stop at the smaller COPS like Able Main, Hannukah Miracle, FOB Monti, and Camp Joyce before returning.

Marine LtCol Anthony Terlizzi was awaiting us. An artilleryman by trade, he's the senior Marine in this area, and therefore responsble for the Marine mentoring program in the Kunar and Nuristan region (while reporting to Col Haynes). Under him are LtCol's Mike Cuccio and Kevin Anderson, who are 'up-country' with their men, and in the morning the convoy would run north to take us to the small bases for which they are responsble.

Even from the backseat of a humvee, Afghanistan is lovely country. The river - and Pakistan - is on the right, along with trees, villages, and one 'National Geographic" view after another; it's easy to take 100 pictures daily here. Children uniformly wave enthusiastically as we go past, and many of the adult men nod their heads or otherwise make some sort of gesture of acknowledgement. It's hard to determine what the women think, however; they're wearing full-strength, up-armored chadors that even covers their eyes, so their take on the American convoy remains a mystery as we roll by on the way to Camp Blessing.

Blessing is dug into the side of a mountain, and sits at the end of the usually kinetic Kornegal Valley. Lots of firefights in this valley in the past few years; this area used to be one of Afghanistan's chief sources of logs - lumber until the American Army came in and shut down the logging businesses which cost jobs. Now the Kornegali's take Saudi money funnelled through Pakistan to fight the Americans, and since they know the steep valley best, it's a difficult fight.. As in many areas of Afghanistan, the fight is more economic than ideological; the availability of steady jobs would cut the supply of guerillas considerably.

After an Afghan-style dinner on base with Mohammed Nasim, the local deputy Kandak commander, Haynes was able to talk at length with his Marines. "You've done well", he told the few of them on base, "but don't relax. keep up the pressure, work until the last day, and pay attention. Stay aggressive; we're not going to sit back and let the fight come to us...and in three weeks we'll all be back home in Okinawa."

Leaving in the morning, Haynes repeated his message "...be aggressive - but be smart. Get out there, and finish hard."

Driving out along the narrow valley roads was a replay of yesterday...except for the incident at the voter registration station in one small town. Afghanistan is actively registering voters for their upcoming Spring 2009 elections, and the ANA is being stretched thin as they safeguard the registration stations from Taliban violence and intimidation. Driving past one station, with 30-40 men and women lined out outside to register, we recieved a radio report of "bad guys setting up a DSKA ( the Russian version of our .50-cal haeavy machine gun) to shoot into the town..." Our small convoy slammed to a halt, and began to ready itself for a QRF mission (quick relief force), should the shooting start. But virtually simultaniously, the Army unit got grid coordinates on the bad guys and called in a mortar mission that killed the bad guys...this is voter registration; Afghan-style.

Only a few minutes later just a mile or so down the road from the potential massacre, at the next ugly little base, Able Main, Haynes stopped to give the same talk to the small group of Marines and Soldiers manning that little outpost "...You've done a great job; stay alert; don't take unnecessary risks, but stay aggressive, and keep bringing the fight to them."

And then it was back into the humvees as we rolled down the road again to yet another base
Posted by Andrew Lubin at 4:43 PM