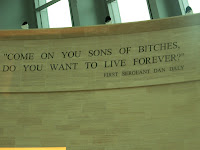 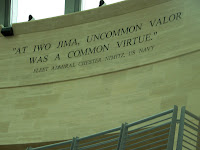 For a Hawai'i Marine, it might make an exception.

A resolution proposed by Councilman Charles K. Djou last week and passed out of committee, urges the president, secretary of defense and secretary of the Navy to reconsider a past decision not to award the Medal of Honor to Sgt. Rafael Peralta.

The 25-year-old Peralta, who was with the 1st Battalion, 3rd Marine Regiment out of Kane'ohe Bay, died during intense house-to-house fighting in Fallujah, Iraq, on Nov. 14, 2004.

At least four Marines with Peralta at the time stated in written reports that they saw the short and stocky Mexican-American nicknamed "Rafa" pull a grenade to his body after it had bounced into a room.

A friendly-fire gunshot and the grenade blast combined to kill Peralta.

The Medal of Honor recommendation passed examination by the Marine Corps, U.S. Central Command and Department of the Navy before being rejected by five individuals appointed by Defense Secretary Robert Gates.

The decision was made to instead award Peralta the Navy Cross — the service's second- highest award for valor.

As such, Peralta was a member of the community.

Djou, who is a captain in the Army Reserve, said that "having heard from family and having spoken to several of the Marines who served with (Peralta) É I think there's a lot of merit for him to be awarded the Medal of Honor."

Djou said he's optimistic about the resolution's passage before the full council on Jan. 28.

Rosa Peralta, the Marine's mother, sent an e-mail to the City Council from San Diego saying: "Many people ask me why my son was denied the Medal of Honor, but we ourselves don't have an answer to that question. He was a son, a brother, and a friend to the fullest and there is nothing that will replace our loving son. However, it will give me peace if the president returns my son Rafael Peralta's honor back. He was a man that died with honor for the honor of this country that he adopted."

Rafael Peralta had become an American citizen while in uniform.

Members of Congress in California and Hawai'i have asked similar questions about the medal downgrade. The family hopes Barack Obama will intercede once he's president.

In a November letter to U.S. Sen. Daniel Akaka, D-Hawai'i, Gates explained his decision. "The department went to significant lengths to ensure the (Medal of Honor) recommendation for Sgt. Peralta received thorough and complete consideration, just as we do every recommendation," Gates said.

But Gates added that, unfortunately, an internal review could not reconcile "contradictory evidence." As a result, Gates said, he took the unusual step of soliciting the counsel of five independent experts.

Questions were raised as to whether Peralta, hit in the head by a gunshot, had the mental capacity to reach out for the grenade.
Posted by Andrew Lubin at 7:35 AM