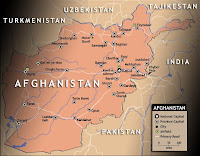 WASHINGTON — American support for the war in Afghanistan has ebbed to a new low, as attacks on U.S. troops and their allies have hit record levels and commanders are pleading for reinforcements, a USA TODAY/Gallup Poll shows.

In the poll taken Saturday and Sunday, 42% of respondents said the United States made "a mistake" in sending military forces to Afghanistan, up from 30% in February. That's the highest mark since the poll first asked the question in November 2001 when the U..S.-led invasion ousted the Taliban government that sheltered al-Qaeda terrorists responsible for the 9/11 terror attacks.

Those who said the war is going well dropped to 38% in the latest poll, the lowest percentage since that question was asked in September 2006.

Gen. David McKiernan, the top U.S. commander in Afghanistan, concerned about deteriorating security there, has asked for 30,000 additional U.S. troops. President Obama is sending 17,000 troops, but he has ordered a thorough review of the strategy before deciding to send any more. There are about 38,000 U.S. troops there now.

Attacks with improvised explosive devices (IEDs) killed 32 coalition troops in the first two months of 2009, triple the number for the same period in 2008. Last year, there were 3,276 IED attacks, a 45% increase over 2007, and a record for the war. Insurgents killed four U.S. troops Sunday in Afghanistan with a roadside bomb.

John Nagl, a retired Army officer and president of the Center for a New American Security, said pessimism about Afghanistan stems from seven years of fighting and security trends continuing to point downward. Nagl said he agrees with McKiernan's strategy of using additional U.S. troops to improve security for the Afghan people, support their government and build their economy. Stabilizing neighboring Pakistan is also essential, he said.

"This is going to be really hard," Nagl said. "That said, the stakes are enormously high."

Success in Afghanistan will depend on Obama's ability to make the case for more sacrifices there, said Thomas Donnelly, a military analyst at the American Enterprise Institute.

Public support for the war "is critical," Donnelly said, "because it's almost certainly going to be very long and very difficult."

The poll found more optimism about the war in Iraq, where security gains have dramatically reduced U.S. casualties. In 2008, 314 U.S. troops were killed in Iraq compared with 904 in 2007.

Did the United States make a mistake in sending military forces to Afghanistan?

Source: Poll of 997 adults nationwide Saturday and Sunday. Margin of error: +/-3 percentage points.
Posted by Andrew Lubin at 8:39 AM