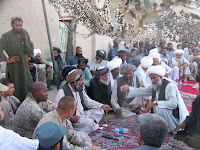 SORKHDOZ, Afghanistan - The mullah's message was blunt. We don't trust you and if you don't earn our trust, our first meeting will be our last.

With that, he stood abruptly and walked out of his first "shura," or council meeting, with U.S. Marines.

U.S. forces who have moved deep into formerly Taliban-controlled territory in southern Afghanistan this week say they are here to stay and will not leave until they have improved the lives of ordinary people.

But locals -- used to seeing NATO troops come through to fight but fail to follow through on promises of development -- may not be won over easily.

This week, the Marines, sent by President Barack Obama, launched operation Strike of the Sword, one of the biggest operations by ground forces in Afghanistan since Soviet forces withdrew in 1989.

Their goal has been to seize quickly the lower Helmand River valley, a Taliban stronghold and the world's biggest opium producing region, where fighters resisted advances by an overstretched British-led NATO force for years.

In the village of Sorkhdoz, Foxtrot Company of the 2nd battalion, 8th Marines held their first shura with local elders on Sunday, three days after arriving on assault helicopters.

No one invited them into their home. Instead, they met on the street, in the shade of the outside wall of a mud-brick compound. The company commander, Captain Junwei Sun, promised his troops were not just passing through.

"This is a beautiful village. It's very peaceful. And we need to work to keep it that way," Sun said. "I know there's Taliban. They come through the village and intimidate you and intimidate your children. That's why I want you to know, we are going to stay here."

They want the provincial authorities to allocate more water for their irrigation system. They want a health clinic, and they want a school. Produce these things or leave us alone, he said.

"I do not trust you. There have been international forces that have come through the village and promised schools, promised clinics. When you are already (delivering) that, then I will trust you," he said.

"We are out of patience here. If you do not do these things and solve these problems, we will leave this village. We will fight: every man, woman and child, we do not fear death."


"This is our last speech, and if you can't solve these problems, we will not have another shura. We will not sit like this again and talk with you," he said. He then got up and walked away, leaving the Marines to finish the shura without him.

Suddenly, a Marine could be heard up the road shouting "stop!" and pointing his rifle at a man driving a motorcycle with two women hidden in burqas sitting behind him on the bike.

The Marine summoned an interpreter. Afghan police searched the driver and allowed the motorcycle to drive on. The village elders and the other Marines holding their shura watched the tense incident in quiet.

"I know you think you are here for our security. But you have come here to disturb us," said one of the elders, Hajji Baluch. "The women on the motorcycle were on their way to a clinic."

Captain Sun said he would try to persuade his men not to stop motorcycles with women.

"We're still new here. We're still trying to get used to the people. Once we know the people, we'll get better," he said.

In the end, they agreed to hold another shura. The Americans promised to bring officials from the agriculture ministry who would discuss providing the town with more water for irrigation.

The Marines shook hands and headed back to the compound they have occupied as a combat outpost. The elders remained in the street and quietly watched them walk away.


Copyright 2009 Reuters. Click for restrictions.
Posted by Andrew Lubin at 11:26 AM

unfortunately, not a surprise. Our credibility has been shot, because unlike in US, politician cannot just come by and make lots of promises and not do anything about it for next four years, the reasons why Taliban and warlords are so strong is that they DO execute on their promises whether by force or cajoling but they get things done. I wish we could say the same...