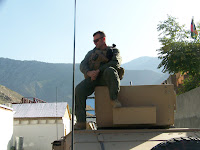 Americans Won't Accept 'Long Slog' In Afghanistan War, Gates Says
The Defense secretary says forces must show progress in a year or risk losing public support -- especially as casualties mount with at least 50 U.S. and NATO deaths in July, the deadliest month yet.

Washington, DC. — After eight years, U.S.-led forces must show progress in Afghanistan by next summer to avoid the public perception that the conflict has become unwinnable, Defense Secretary Robert M. Gates said in a sharp critique of the war effort.

Gates said that victory was a "long-term prospect" under any scenario and that the U.S. would not win the war in a year's time. However, U.S. forces must begin to turn the situation around in a year, he said, or face the likely loss of public support.

"After the Iraq experience, nobody is prepared to have a long slog where it is not apparent we are making headway," Gates said an in interview. "The troops are tired; the American people are pretty tired."

Deep public unhappiness with the war in Iraq helped sink President George W. Bush's approval ratings, making him the most unpopular president in recent history, according to some surveys.

While not predicting a parallel fate for the Obama administration, Gates emphasized the need for progress in Afghanistan during an interview aboard his plane as he returned to Washington after visiting sailors Friday at the Great Lakes Naval Station in Illinois.

Gates has spoken about the need for progress in Afghanistan and the public's fatigue of war. But in this interview, he went further by offering a more specific time frame for needed progress as well as the consequences of failing to meet it. Gates has overseen an overhaul in the administration's Afghanistan strategy in recent months, sending 21,000 additional troops and choosing a new commander to lead the international effort.

"This is where we are really getting back into the fight," Gates said.

The strategy switch came after extremist attacks rose dramatically last year and U.S. and NATO troop casualties surpassed record levels. A U.S. fighter jet crashed today, killing the two crew members and bringing the number of Western deaths in Afghanistan to at least 50 in July, the deadliest month yet.

President Obama said last week that he hoped to "transition to a different phase" after the Afghan presidential election Aug. 20.

During the 2007 buildup of U.S. troops in Iraq, military leaders often mentioned the importance of adding time to "the Washington clock" to give their strategy a chance to work.

Gates said that Americans would have the patience to continue the war in Afghanistan only if the new military approach began to move the conflict out of deadlock. "If we can show progress, and we are headed in the right direction, and we are not in a stalemate where we are taking significant casualties, then you can put more time on the Washington clock," he said.

Gates, whom Bush named Defense secretary in 2006, said he acted as soon as he could to overhaul the Afghanistan effort but was limited by the troop buildup in Iraq. "Within the framework of the surge . . . what I did in Afghanistan was about all I could do with the forces we had available."

With the new troop strategy in place, Gen. Stanley A. McChrystal, the top U.S. commander in Afghanistan, and Gen. David H. Petraeus, head of U.S. forces in the Mideast, are due to provide their assessment of the U.S.-led effort in Afghanistan early next month.

Gates said the commanders were free to provide an honest assessment, but also cautioned that additional troops might not be approved. "I did not want either of them to feel constrained in making their recommendations," Gates said. "That is not to say we will accept all of their recommendations."

The war in Afghanistan officially is a NATO mission. Gates said the alliance is facing the challenge of rising casualties just as the overall coalition war effort is beginning to function better. Fifteen British troops were killed in action in Afghanistan this month, and Canada has lost five of its service members.

"There has been an extraordinary amount of political courage as some of our partners have taken some really devastating causalities," Gates said. "The British have had a rough couple of weeks."

Gates is also locked in a budget fight with Congress over his drive to halt further production of the F-22 fighter jet, cancel a new presidential helicopter and push more money into programs closely related to ongoing U.S. combat missions, like unmanned aerial drones.

As House and Senate committees have supported more money for the F-22, the helicopter and other programs, Gates has objected and the White House has threatened a veto if those funds are not cut. In an address last week in Chicago, Gates delivered his toughest comments yet on the budget, attacking the funding for F-22s as a "business as usual" approach that will siphon money from more important programs.

But in the interview, Gates adopted a more cordial tone, noting that Congress had agreed to most of the dozens of spending shifts he recommended. "We are only focused on three or four now. They happen to be pretty important ones, but there has been a fair amount of buy-in," Gates said.

Gates has generally good relations with Congress and described budget negotiations as respectful. "They know where I am coming from and I know what their concerns are," Gates said. "There is no questioning of anyone's motives here. It is figuring out the right direction."
Posted by Andrew Lubin at 8:48 AM