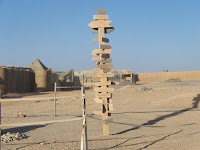 The U.S. Marine Corps has banned Twitter, Facebook, MySpace and other social media sites from its networks, effective immediately.

“These internet sites in general are a proven haven for malicious actors and content and are particularly high risk due to information exposure, user generated content and targeting by adversaries,” reads a Marine Corps order, issued Monday. “The very nature of SNS [social network sites] creates a larger attack and exploitation window, exposes unnecessary information to adversaries and provides an easy conduit for information leakage that puts OPSEC [operational security], COMSEC [communications security], [and] personnel… at an elevated risk of compromise.”

The Marines’ ban will last a year. It was drawn up in response to a late July warning from U.S. Strategic Command, which told the rest of the military it was considering a Defense Department-wide ban on the Web 2.0 sites, due to network security concerns. Scams, worms, and Trojans often spread unchecked throughout social media sites, passed along from one online friend to the next. “The mechanisms for social networking were never designed for security and filtering. They make it way too easy for people with bad intentions to push malicious code to unsuspecting users,” a Stratcom source told Danger Room.

Yet many within the Pentagon’s highest ranks find value in the Web 2.0 tools. The Chairman of the Joint Chiefs of Staff has 4,000 followers on Twitter. The Department of Defense is getting ready to unveil a new home page, packed with social media tools. The Army recently ordered all U.S. bases to provide access to Facebook. Top generals now blog from the battlefield.

“OPSEC is paramount. We will have procedures in place to deal with that,” Price Floyd, the Pentagon’s newly-appointed social media czar, told Danger Room. “What we can’t do is let security concerns trump doing business. We have to do business… We need to be everywhere men and women in uniform are and the public is. If that’s MySpace and YouTube, that’s where we need to be, too.”

The Marines say they will issue waivers to the Web 2.0 blockade, if a “mission critical need” can be proven. And they will continue to allow access to the military’s internal “SNS-like services.” But for most members of the Corps, access to the real, public social networks is now shut off for the next year.
Posted by Andrew Lubin at 8:58 AM