Weaning the Afghans off Opium 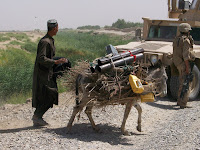 The U.S. and British governments plan to spend millions of dollars over the next two months to try to persuade Afghan farmers not to plant opium poppy, by far the country's most profitable cash crop and a major source of Taliban funding and official corruption.

By selling wheat seeds and fruit saplings to farmers at token prices, offering cheap credit, and paying poppy-farm laborers to work on roads and irrigation ditches, U.S. and British officials hope to provide alternatives before the planting season begins in early October. Many poppy farmers survive Afghanistan's harsh winters on loans advanced by drug traffickers and their associates, repaid with the spring harvest.

"We need a way to get money in [farmers'] hands right away," said a senior U.S. military official in Afghanistan.

The program replaces the Bush administration's focus on crop eradication, which "wasted hundreds of millions of dollars," according to Richard C. Holbrooke, the Obama administration's special representative to Afghanistan and Pakistan. Destroying the crops succeeded only in "alienat[ing] poor farmers" and "driving people into the hands of the Taliban," he told reporters last week.

Poor track record
But many previous U.S.-funded crop-substitution programs have failed as well, from Asia to Latin America. A similar plan in Colombia, begun in the late 1990s, has barely made a dent in the level of cocaine production, although the country began to stabilize in recent years as its U.S.-trained military adopted new strategies against armed insurgents and civil institutions were strengthened.

Officials maintain that the new Afghan plan differs from unsuccessful "alternative" plans because it is an integral part of a military-development strategy that includes tens of thousands of U.S. troops to keep the Taliban and traffickers at bay while Afghan security forces are being trained. Plans call for hundreds of U.S. and international aid experts to work directly with farmers and local officials until the Afghan government has matured.

"The way [the assistance] is offered is important," said the senior U.S. military official, one of several who spoke on the condition of anonymity because they were not authorized to discuss the program on the record. "We are not providing subsidies . . . we are not just handing out cash." Farmers will have a "stake" in the program, he said, buying vouchers for seeds and fertilizers for about 10 percent of their value. Cash will be distributed only as credit or for work performed, the official added.

The United States and its allies in Afghanistan have long debated whether they should simply pay farmers for not planting poppy, a short-term fix that experts have deemed counterproductive. Farmers probably would take the money and "grow it anyways," said another U.S. official in Afghanistan. "We would likely drive the price up," he added, "as there would now be competition between the narcotics trade and the government. More farmers would therefore plant more poppy next year."

The epicenter of the overlapping wars against opium production and the Taliban is southern Afghanistan's Helmand province, where more than two-thirds of the country's poppy is grown. Thousands of Marines and British troops are in the midst of a major offensive there against entrenched insurgent forces and are providing security in villages as they are cleared.

"By this time next year," the senior military official said, "what we want to see is decreased poppy harvest. For us, that will be a metric of success. If we don't get conditions set now, in the next 60 days, we're not going to get the results we'd like."

The timeline is daunting. A planned "civilian surge" of hundreds of U.S. aid officials and agriculture experts has been slow to arrive. A micro-finance loan program is in the planning stages, and although $300 million in aid has been set aside for "rapid response" initiatives, including voucher programs for seeds and fertilizer, distribution has been sluggish. Mohammad Gulab Mangal, the governor of Helmand, whom U.S. officials have praised for encouraging local communities to turn away from poppy, held the first of eight scheduled outreach meetings only last week.


The plan also includes stepped-up efforts to interdict drug shipments and destroy stockpiles. The Drug Enforcement Administration expects to increase its manpower on the ground from 13 agents in 2008 to 81 by the end of this year. The Marine assault in Helmand, a DEA official in Kabul said, has "greatly enhanced" the agency's ability to take action there, he said.

The DEA is also training Afghan police in counternarcotics investigations, and the Justice Department is developing a program for Afghan prosecutors, although those efforts are said to be moving slowly. Officials disagree over how much of the profit from Afghanistan's opium exports goes directly into Taliban coffers. According to Holbrooke, most Taliban funding comes from wealthy individuals in the Persian Gulf region. But there is widespread agreement among U.S. officials that drug traffickers, warlords, corrupt government officials and insurgents work cooperatively to continue cultivation, processing and exports.

Some of the greatest challenges to the new strategy are at the level of farmhouse economics. More than 365,000 Afghan farm households earned about $730 million from poppy last year — a fraction of the $3.4 billion earned from opium exports, according to the United Nations, but an amount nearly equal to the national government's $750 million in official revenue.

The average Helmand farmer cultivates less than an acre of land, with about half an acre planted in poppy yielding a gross income of about $2,000. After paying 45 percent of that in production costs, and 10 percent in local taxes, he nets about $900, more than twice what he would earn from wheat at current, albeit rising, prices.

Extra workers travel from all over Afghanistan for the harvest, and the pay is higher than it is for virtually all other forms of unskilled labor. The average daily wage for construction work, the United Nations reported, is $3.60. Wheat harvesting earns $4.40, and opium "lancing/gum collection" pays $9.50. Wages in Helmand for lancing, $15 a day, are the highest in the country.

"What we're looking for is a way to compete with that," the senior military official said of the opium economy. "This is not easy. . . . There is no silver bullet."

Correspondent Pamela Constable in Kabul and staff writer Greg Jaffe contributed to this report.
Posted by Andrew Lubin at 9:31 AM