Why So Few Medals of Honor - Peralta ?? 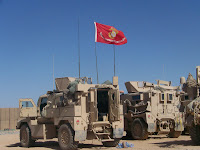 WASHINGTON - Eight years of war in Afghanistan and Iraq. About 4,000 members of the U.S. military killed in action. More than 34,000 wounded. Just six considered worthy of America's highest military award for battlefield valor.

For some veterans and members of Congress, that last number doesn't add up.

They question how so few Medals of Honor — all awarded posthumously — could be bestowed for wars of such magnitude and duration.

Pentagon officials say the nature of war has changed. Laser-guided missiles destroy enemy positions without putting soldiers in harm's way. Insurgents deploy roadside bombs rather than engage in firefights they're certain to lose.

Those explanations don't tell the whole story, said Rep. Duncan Hunter, a first-term lawmaker who served combat tours as a Marine in Iraq and Afghanistan. He has sponsored legislation that directs the defense secretary to review current trends in awarding the Medal of Honor to determine what's behind the low count.

The bill passed the House. If Senate negotiators go along, Secretary Robert Gates would have to report back by March 31.

Congressman thinks standards have been raised
"It seems like our collective standard for who gets the Medal of Honor has been raised," said Hunter, R-Calif.

"The basis of warfare is you've got to take ground and then you've got to hold it. That takes people walking into houses, running up hills, killing bad guys and then staying there and rebuffing counterattacks," he said. "That's how warfare has always been no matter how many bombs you drop and how many predators you have flying around."

Military officials said they welcome the opportunity to conduct an in-depth review of the award process. Still, they dispute Hunter's theory.

"Nominations go through no more or less scrutiny than in the past," said Eileen Lainez, a Pentagon spokeswoman. "The standard for the Medal of Honor is high, as one would expect for our nation's most prestigious military decoration."

AMVETS, a veterans' advocacy group, said it supports Hunter's efforts. It held a banquet for Medal of Honors in January, and the low number of medals was a big topic of discussion, said Jay Agg, the group's communications director.

Deed must be above and beyond call of duty

The Medal of Honor has been awarded 3,467 times since the Civil War. Almost half — 1,522 — were awarded in that conflict alone. The next highest tally came from World War II — 464. In the Vietnam War, 244 were awarded.

To earn the medal, at least two eyewitnesses have to view a deed so outstanding that it clearly distinguishes gallantry above and beyond the call of duty. No margin of doubt is allowed. Nominations make their way through military channels until eventually they're approved at the highest levels of the Pentagon and then by the president.

Drew Dix, 64, of Mimbres, N.M., received the medal for actions taken during the Tet Offensive in Vietnam when he risked his life during a 56-hour battle to rescue civilians. He said he didn't feel comfortable judging the current Medal of Honor process.

"We've trusted the military to fight this war," Dix said. "We've got to trust the military in all aspects of it, including the awarding of medals."

Jack Jacobs, 64, received the award for actions taken in Vietnam to rescue wounded soldiers. He said the Pentagon's explanation for the low Medal of Honor count is logical, but he would not rule out other factors because of the subjective nature of the award.

"I'm not a fan of single factor analysis," Jacobs said. "There are lots of reasons why things occur and that is only one of them. Human attitudes also play a great role."

Jacobs, a military analysis at MSNBC, predicted the war in Afghanistan will involve more of the kind of close combat that leads to Medal of Honors being awarded.

It's unclear exactly how many soldiers have been nominated for the award from the two wars.

Seven have made it all the way to the defense secretary, and six were approved. The exception is Sgt. Rafael Peralta of San Diego. Hunter said the Peralta case shows that a higher standard is being used for the medal than in previous wars.

Peralta died on Nov. 15, 2004, during fighting in Fallujah, Iraq. The military's investigation showed he was probably hit by friendly fire from a member of his unit as they engaged insurgents inside a house.

Soldiers say Peralta covered live grenade with body
Witnesses said Peralta, a Mexican immigrant who became a U.S. citizen while in the Marines, fell to the ground face first after being shot in the crossfire. A fleeing insurgent threw a hand grenade into the room, which bounced off a couch and landed near Peralta's head.

"Sgt. Peralta grabbed the grenade and pulled it underneath him while we took cover," said an unidentified soldier whose name is blacked out as part of the investigative file the military released publicly.

Peralta's nomination was sent back for further investigation after a preliminary autopsy report stated the head wound would have been immediately incapacitating and "he could not have executed any meaningful motions."

In the end, Lt. General Richard F. Natonski, stuck with his recommendation: "I believe Sergeant Peralta made a conscious, heroic decision to cover the grenade and minimize the effects he knew it would have on the rest of his Marine team."

Gates assemble an independent panel to review the nomination — something he did not do in the other six cases sent his way. The reviewers included a former commanding general, a Medal of Honor recipient, a neurosurgeon and two pathologists.

"The reviewers each individually concluded that the evidence did not meet the exacting 'no doubt' standard necessary to support award of the MOH," Gates said in a letter to Hunter.

Robert Reynolds, a lance corporal at the time, was about three feet to five feet behind Peralta when the grenade exploded. He has no doubt that Peralta purposefully attempted to place the grenade underneath himself to save others.

"It wasn't just something he barely did. He physically reached out and pulled it into his body," said Reynolds, 31, and now a corrections office and father of two daughters in Ritzville, Wash.

In the end, Peralta received the Navy Cross, the branch's second-highest honor. Several California lawmakers have petitioned President Barack Obama to order a review of Peralta's case. AMVETS said all recipients of the second-highest honor for bravery for their branch of the military should have their case reviewed to determine if their actions merit the Medal of Honor.

Copyright 2009 The Associated Press. All rights reserved.
Posted by Andrew Lubin at 8:12 AM