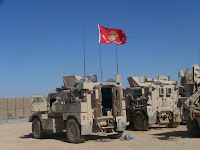 QUANTICO, Va. (September 18, 2009) – The United States Marine Corps is launching a new multimedia campaign, America’s Few, to challenge America’s youth to prove they have what it takes to become a Marine.

The Marine Corps aims to recruit the best in each generation, focusing on young Americans who hear the call to become a Marine and decide to make the life-changing decision to answer it. The America’s Few campaign features three Marines who answered that call and earned the title Marine after completing the most demanding recruit training our nation offers. The three Marines, LCpl Oscar Franquez, Jr. of Canyon Country, Calif., LCpl Benjamin Lee of Tulsa, Okla., and LCpl Martin McCallum of Freeport, N.Y., are all members of the USMC Silent Drill Platoon, based at Marine Barracks Washington, D.C.

“The calling to become a United States Marine has always been answered by the best and brightest of each generation,” said Major General Robert E. Milstead, Jr., Commanding General, Marine Corps Recruiting Command.

The America’s Few campaign comes at a juncture when the Marine Corps is focusing not only on enlistment numbers, but on the quality of new Marine recruits when more and more young men and women are considering military service as an option.
“There is only one reason to put yourself through the toughest 12 weeks of your life – and that is to become a United States Marine,” said LCpl Franquez. “Becoming a Marine has allowed me to defend my country and become part of a centuries old tradition of service and sacrifice.

For generations, the Marine Corps has taken young Americans who have answered the call and forged them into Marines through a time-tested crucible known as recruit training.

“Recruit training was the greatest challenge of my life,” said LCpl Lee. “Our title is earned, never given.

Marine Corps recruit training transforms the many into the few. It is an unwavering and relentless process that presents the ultimate challenge: an epic test of mind, body and character that molds our Nation’s greatest warriors.

“The training pushed me far beyond my perceived limits and inspired me to be my best. In the end, I demonstrated to myself and my family that I have what it takes to be a Marine,” said LCpl McCallum.

America’s Few is a prequel to America’s Marines, launched in January 2008, to strengthen America’s understanding of what the Marine Corps stands for. The America’s Marines campaign consisted of a nationwide tour, a new Web site and a TV advertisement that featured a symbolic line of Marines standing ready to defend our nation. It was filmed at iconic landmarks and picturesque small towns across the United States. America’s Few was filmed this summer at Marine Corps Recruit Depot Parris Island, S.C., and on location at Point Judith, R.I.
Posted by Andrew Lubin at 11:11 AM