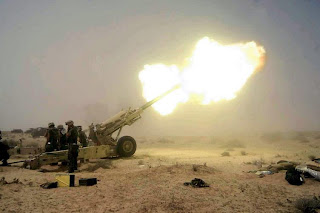 Military Sweep Of Marja Focuses On Pockets Of 'Determined Resistance'

Marines and Afghan troops target insurgents in one corner of the city as they battle holdout fighters in various locations. At least 8 Marines KIA

Reporting from Kabul, Afghanistan, and Nawa, Afghanistan -- Backed by fighter jets and attack helicopters, U.S. Marines and Afghan troops closed in on an insurgent-ridden sector of Marja on Sunday, the ninth day of a coalition bid to wrest control of the southern Afghan town from the Taliban.

The fighting, concentrated in northwestern Marja, took place amid what the North Atlantic Treaty Organization called "determined resistance" from holdout fighters in various locations in and around the town. Advancing coalition troops faced a continuing threat from small-arms fire and homemade bombs, the Western military said in a statement.

"We're still pushing through the city," said Lt. Josh Diddams, a Marine spokesman. Some of the remaining pockets of insurgents consist of only a handful of fighters, but at least 40 -- a relatively large concentration -- were thought to be holed up in the town's northwestern quarter, the Associated Press reported.

NATO said Sunday that another service member was killed in connection with the offensive, bringing the number of Western troop fatalities to 13. At least eight were Marines.

The battle of Marja is the largest coalition assault since the 2001 U.S.-led invasion that toppled the Taliban. NATO commanders want to break the insurgents' grip on the town and its environs as part of a larger effort to establish government authority for the first time in years in a strategic swath of troubled Helmand province.

NATO said the operation remained "on track," although commanders acknowledged last week that clearing operations will take a month or more, somewhat longer than originally envisioned.

In coming days, however, the coalition expects the town will be secure enough to bring in a newly appointed Afghan governor, marking a symbolic shift away from the military confrontation and toward job creation, school openings and the setting up of other long-absent public services.

The military said in a statement that route clearance -- ridding the roads of one buried bomb after another -- was improving freedom of movement for local people. Many Marja residents have been pinned down in their homes for days by the fighting or have fled to other parts of the province.

Although the Marja offensive is concentrated in the district of Nad Ali, where the town is located, related operations are taking place across Helmand, the insurgency's traditional heartland.

NATO forces on Sunday reported the capture of a Taliban commander and another insurgent in a shootout in Kajaki district, in the east of Helmand, which left one of the suspects wounded. Both of the men arrested Friday were thought to have helped plant bombs and plan attacks.

In an operation last week that was tied to the Marja offensive, coalition forces in Sangin district, also in Helmand's east, captured three Taliban fighters and seized nearly 150 detonators for use in bomb-making.
Posted by Andrew Lubin at 10:59 AM