Taliban Fighting Back in Marjah 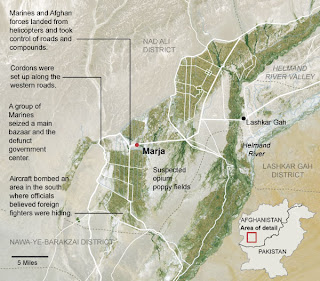 Taliban Hit Back In Marja With A Campaign Of Intimidation
By Rod Nordland
New York Times
March 18, 2010

KABUL, Afghanistan — The Taliban have begun waging a campaign of intimidation in Marja that some local Afghan leaders worry has jeopardized the success of an American-led offensive there meant as an early test of a revised military approach in Afghanistan.

The Taliban tactics have included at least one beheading in a broader effort to terrorize residents and undermine what military officials have said is the most important aim of the offensive: the attempt to establish a strong local government that can restore services. The offensive ousted the Taliban from control of their last population center in southern Helmand Province, but maintaining control over such territory has proved elusive in the past.

Though Marja has an occupation force numbering more than one coalition soldier or police officer for every eight residents, Taliban agitators have been able to wage an underground campaign of subversion, which residents say has intensified in the past two weeks.

“After dark the city is like the kingdom of the Taliban,” said a tribal elder living in Marja, who spoke on the condition of anonymity out of fear of the Taliban. “The government and international forces cannot defend anyone even one kilometer from their bases.”

The new governor of Marja, Haji Abdul Zahir, said the militants were now holding meetings in randomly selected homes roughly every other night, gathering residents together and demanding that they turn over the names of anyone cooperating with the authorities.

Mr. Zahir said the Taliban also regularly issued “night letters,” posted at mosques or on utility poles, warning against such collaboration, and often intimidated residents into providing them with shelter and food, even in densely populated neighborhoods of the city, which has a population of 80,000.

“They are threatening and intimidating these people who are cooperating,” he said in a telephone interview. “They have been involved in the area for a long time and they know how to intimidate people. They threaten them with beheadings, cutting off hands and feet, all the things they did when they were the government.”

More than 6,000 American soldiers, Marines and British soldiers fought their way into Marja beginning Feb. 13, along with thousands of Afghan troops and police officers. Many others have reinforced the occupation since to protect an influx of Afghan officials and Western experts to build an effective government in Marja. That effort to win over the local populace is at the heart of the American and Afghan government strategy, and NATO officials have said it is proceeding well.

Journalists have still not been allowed to visit Marja independently; they must be embedded with the American military. Marja is meant to be a template for a similar campaign aimed for spring in neighboring Kandahar Province, the Taliban’s heartland.

NATO and Marine Corps spokesmen did not immediately respond to requests for comment on the situation in Marja.

Mr. Zahir said it was difficult for the authorities to counter the Taliban’s campaign because the militants were mostly moving around without guns, relying on fear rather than threats. “If they are detained, they claim they are just ordinary citizens,” he said. “At the same time, they still have a lot of sympathy among the people.”

He said it was impossible to estimate how many Taliban fighters remained in the city. “It’s like an ant hole,” he said. “When you look into an ant hole, who knows how many ants there are?”

The tribal elder declared that in his area, called Block 5, the Taliban had complete freedom of movement after dark. He said he believed that was true in many other parts of the city as well. He and the governor were among five community leaders in Marja who expressed similar concerns about the Taliban intimidation campaign.

On March 10, the elder said, a resident of the same area named Nissar Ahmad, 25, was abducted from his home and beheaded, and his body was dumped at night next to the main local school, where residents would be certain to see it in the morning.

“I saw his body myself,” the elder said, adding that he had heard of other beheadings. Mr. Ahmad had previously been a Taliban supporter but had switched allegiance after the city fell, the elder said.

Mr. Zahir dismissed reports of beheadings as rumors. Mr. Ahmad, he maintained, was killed as the result of a personal dispute. However, he said there had been Taliban beatings, including that of a teacher at a new school who was severely beaten on Tuesday.

Walid Jan Sabir, the Afghan member of Parliament for Marja and the surrounding Nad Ali District, said he had heard reports from Marja elders visiting his office in Kabul this week of two beheadings of pro-government elders, both members of the government’s Community Development Council.

Mr. Sabir scoffed at Mr. Zahir’s denial of beheadings, saying, “He is not from the area and he is only staying in his office so he doesn’t know what is happening.” Mr. Zahir lived for many years in Germany, where court officials said he was jailed for stabbing a stepson. Mr. Zahir has denied that.

A spokesman for the Interior Ministry, Zemarai Bashary, said the police in Marja had been told to investigate the beheading reports.

“We don’t know if it’s one person or many cases and many persons, but we are investigating and we will soon have an answer,” he said.

The elder said most people in Marja supported the government’s efforts to restore control, but most were also afraid to challenge the Taliban.

“I’m not saying the Taliban will win this war,” he said. “If the government strengthens their positions and creates small bases all over town close to one another and then permanently patrols between these bases, they can get rid of the Taliban.”

Mr. Sabir was critical of American and Afghan forces for surrendering the night. “At night the local people are the hostages of the Taliban,” he said. Since many tribal leaders have fled out of fear, and many of the Afghan officials coming in now are not from Marja, it is difficult for them to know who the Taliban activists are.

“The Taliban and the Marja residents all have beards and turbans so it’s impossible to distinguish them,” he said. “If it goes on like this I’m sure the situation will deteriorate and we’ll find it’s chaos there again.”

==========
Sangar Rahimi contributed reporting from Kabul, and an employee of The New York Times from Helmand Province.
Posted by Andrew Lubin at 8:31 AM