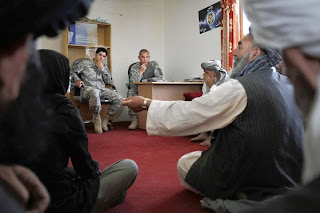 The photo above shows why the war in Afghanistan is not going well for the United States.

It came from Laura King’s LATimes.com article of 17 Aug “'Three cups of tea' a byword for U.S. effort to win Afghan hearts and minds.” As Ms. King so aptly explains, the phrase “three cups of tea” has been adapted from the Greg Mortenson best-seller of the same name by the American military as the basis of how to conduct a counterinsurgency campaign.

The concept is a good one: win the trust of the people and they’ll tell you who are the bad guys, as well as what’s needed in their village to make it a semi-viable place to live – building local governments that can minister to its own people is incredibly important in a country whose central government is known worldwide for corruption and incompetence. “Counterinsurgency is easy,” Col Dale Alford (USMC) said at the National Press Club "COIN Symposium", “you want to make the locals choose us.” It worked with the Marines and Sunni’s in Ramadi and Anbar; it should work in Afghanistan where the choices are either us or the Taliban.

But any plan is only as good as it’s implementation…and that bring us back to the photograph : two soldiers sitting at their desk in an office looking down at Afghans who are sitting on the floor on the other side of the room. This is hardly how Gen James Mattis (USMC) and Gen David Petraeus (Army), co-authors of the 2006 Army-Marine Counterinsurgency Manual, envisioned building relations with the locals.

Mattis knew how to deal with a wary population. “Take off your sunglasses,” he ordered his Marines back in 2003 Iraq, “and let them get to know you. Play soccer with the kids, and don’t worry if you lose. Shake a lot of hands and chat them up.” Sound, effective advice until Paul Bremer’s ill-planned CPA took charge and Iraq exploded with I.E.D.’s.

What the Army fails to understand is that it’s not how many cups of tea one drinks that’s important, but that the act of drinking tea or sharing a melon is how strangers sit down peacefully and begin to know one another. Afghanistan is an incredibly poor country; perhaps the 5th poorest in the world, and sharing food is the ultimate in hospitality. It’s also worth noting that relationships are not built in a day, neither here, or in Afghanistan. Similar to most courting rituals worldwide, it takes more than one cup of tea and more than one meeting to build a relationship sufficiently deep to talk honestly about schooling, IED’s, and Taliban presence.

Bureaucracy and counterinsurgency are incompatible. Living on a FOB and patrolling by vehicle ensures you meet no locals. Eating at the DFAC means you’re not eating with the locals, and it’s worth noting that ten months after President Obama ordered more troops into Afghanistan, the Army has yet to deploy their final thousands of troops. Air conditioned bunks, Playstations and Wii, fast-food joints, an MWR shop…while such creature comforts are certainly attractive, they also keep the soldiers tied to their FOB’s.

In comparison, the Marine forces in Helmand and Nimroz Provinces live in, or in close proximity to the towns. They have limited internet access, very little a/c, and no Wii. In Musa Qual’ah, they live in the village center. In Marjah, they live on some ten different little patrol bases. In Nawa and Garmsir, considered the success stories of COIN in Afghanistan, they live in-and -around the towns. Relationships and trust are built by constant exposure to each other, and the Marines patrol 3x daily 7 days/ week. Yet Ms. King’s article quotes the ranking elder of a village as mentioning that American soldiers visited him ‘last month’, and how he doubted that “an occasional visit by the American forces could keep the insurgents at bay.”

It’s been written that the Marines out-patrol the Army by a factor of perhaps 20-1; hot, tiring work in a country jaded by nine years of broken Western promises. Yet done properly, as Mortenson’s book and Marine efforts in Helmand Province evidence, personal relationships can bring two disparate cultures together for mutual success. With American assistance, they’ll build enough functioning local governments that will enable our troops to come home.

But to “choose us” the locals need to get to know us, and to “know us” we need to get off the FOB’s and drink chai daily with that village elder.
Posted by Andrew Lubin at 10:58 PM