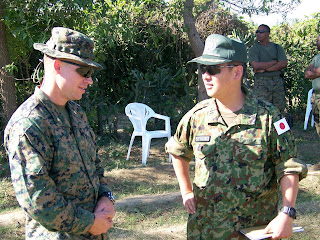 ON Sept. 1, 1945 — 65 years ago this week — I arrived in Leyte Gulf, the Philippines, aboard a Navy transport ship. Along with other newly commissioned ensigns in the Navy Civil Engineer Corps, I was prepared to join one of the Seabee battalions being mustered for an invasion of the Japanese mainland. However, as we had learned during our voyage across the Pacific, the A-bombs had been dropped and Japan had capitulated. As the fates would have it, the day after our arrival — Sept. 2, 1945 — a peace treaty was signed aboard the battleship Missouri in Tokyo Bay.

The war was over. But we all agreed that it would take years — perhaps a generation — before our hatred of the enemy would diminish.

I joined the 29th Naval Construction Battalion, whose postwar assignment saw us traveling to Truk (now called Chuuk), an atoll in the Caroline Islands that had served as headquarters for the Japanese fleet. This formidable base had been bombed into rubble, and now the Navy had decided that the main airstrip should be rebuilt, along with a basic military camp. Under a unique provision in the surrender agreement, 3,000 Japanese were to remain on Truk to perform the necessary construction, working under the direction of an American force. Our battalion was selected to be that American force.

Arriving at Truk, we found ourselves surrounded by the erstwhile enemy: approximately 40,000 warriors noted for their ferocity in battle. Marines had preceded us to assure security, but one could not help feeling a little edgy.

As the youngest and newest officer, I was put in charge of one of the less imposing projects: building a small earth-fill dam on a mountain stream for our water supply system. I had no experience with earth-fill dams, but using handbooks, and with guidance from colleagues who were knowledgeable engineers, I developed a rudimentary plan. Rising some 25 feet from the bottom of a small gorge, the dam was not exactly Grand Coulee; but for me, it was a challenge. For work in the field, I was given three experienced men from our battalion and a Japanese crew of about two dozen under the command of one of their lieutenants.

On the appointed day, the two teams gathered at the construction site and for what seemed like a long time simply stared at each other. Was there hostility or fear? I cannot say for sure. Friendly feelings? Certainly not.

It was up to me to make the first move. I walked over to my Japanese counterpart and ceremoniously unrolled the drawings I had prepared, showing him the outlines of the job. I set up a basic surveyor’s transit, and within minutes my men were driving pointed stakes at designated spots and stretching cord between them. Soon, under orders from their officer, the Japanese soldier-workers were attacking the earth with shovels and picks.

The Japanese lieutenant and I, inhibited by notions of military protocol, did not warm up to each other right away. But enthusiasm for the task at hand, and pride in the progress made, led to mutual respect and, eventually, to friendship. I knew that there had been a breakthrough when he encouraged me to call him “Moe,” an abbreviation of a name that I had difficulty pronouncing.

The anticipated generation-long era of fear and hatred seemed to have been reduced to mere days.

After several weeks, the project was complete and we planned a dedication ceremony. Moe surprised me with the gift of a small ceramic statue, accompanied by a message that had been translated by one of his fellow officers and transcribed painstakingly onto a white kerchief. It read (I’ve retained the original spelling and punctuation):

April 2, 1946. The souvenir of the water plant completion. This is a statue of Admiral of The Fleet Count Hehachiro Togo, I.J.N. He was born at Kagoshima in Kyushu about a hundred years ago. He won the great victory in the Naval Battle of the Japan Sea. Namely he defeated the great Russian fleet (the Barutic Fleet). But some years ago he had a natural death. The world people say that he is the Nelson of the east. I pray that you may be able to make a great work as well as his achievement.

Today the statue stands on a shelf in my office, and the white kerchief, framed, hangs on the wall beside it. Perhaps one shouldn’t generalize from this somewhat idyllic tale, but I do. Recalling the events on a small Pacific atoll in 1945, I am reminded how camaraderie can spring up in the unlikeliest situations.

==========
Samuel C. Florman, the chairman of a construction company, is the author of “The Existential Pleasures of Engineering.”
Posted by Andrew Lubin at 9:04 AM

Thank you for sharing this.