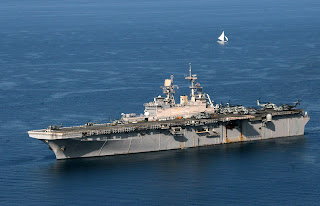 USS Kearsarge, At sea. 0639 EST. AV-8B Harriers from 26th MEU struck Libyan ground forces and air defenses in the early morning hours of March 20, 2011 under the authority of U.N. Security Council Resolution 1973, which is centered on protecting Libyan citizens from any further harm from the Libyan Leader Muammar al-Qadhafi regime.

The 26th MEU joined the international efforts of Operation Odyssey Dawn which is designed to halt an offensive against the Libyan populace. "Protecting the innocent and conducting combined operations are what we are designed to do," said Col. Mark J. Desens, commanding officer of 26th MEU. "Our forces are doing both as part of the U.S. commitment to protect Libyan citizens."