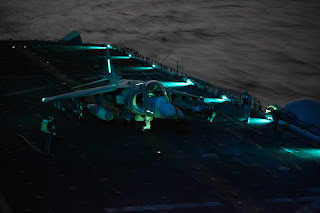 Conditions set forth by the U.N. Security Council towards resolving the unrest in Libya included the removal of Libyan Leader Muammar al-Qadhafi’s forces from Ajdabiyah. These latest strikes by the MEU aimed at preserving the sanctity of the city and the safety of the civilians within it
Posted by Andrew Lubin at 4:14 PM