5 Reasons Not to Strike Libya 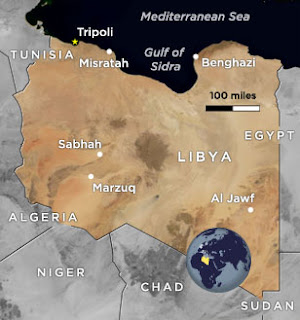 Conventional wisdom might suggest that the U.S. military should step in to halt a notorious dictator from carrying out ruthless crackdowns on his own people -- especially against those standing up for democracy.

This is particularly true in Moammar Gadhafi's case, as he has been a thorn in our side since taking power in a 1969 coup.

This week Secretary of Defense Robert Gates ordered two Navy amphibious ships, USS Kearsarge and USS Ponce, along with a contingent of Marines through the Suez Canal to the Mediterranean -- though he stressed they would be in place for humanitarian relief and potential evacuations.

While noncombatant operations are one thing, combat missions, including European-led talk of establishing a "no-fly zone," are quite another.

So while U.S. leaders continue to discuss options for military contingencies with NATO allies, they ought to think twice before committing the use of force.

Here are five reasons why:

1 - U.S. intervention in Libya would inflame the anti-American sentiment already prevalent in the Middle East, North Africa and other regions. Al-Qaida, pro-caliphate and pan-Arab nationalist crowds would use any U.S. military action taken against Muslims for their propaganda purposes. Venezuela's Hugo Chavez, our chief critic in Latin America, is already exploiting the oil argument, with claims that the U.S. is distorting the situation to "justify an invasion."

2 - U.S. allies need to take more responsibility for their security and economic prosperity. Some 85 percent of Libya's oil goes to European Union countries. Allies who have been vocal in the Libyan crisis -- the U.K., France and Germany -- can combine forces to enforce a "no-fly zone" and launch ground operations, if they desire.

3- Libya is in such a state of chaos that U.S. troops could very well be attacked by anyone. Gadhafi's military, militias and mercenaries would rally around their leader to protect the regime. The pro-democracy rebellion, meanwhile, has depicted Gadhafi with a Star of David, stocked full of U.S. dollars. Its ranks contain dangerous anti-American and anti-Semitic strains -- those who wouldn't likely receive the U.S. as liberators. Sound familiar?

4 - U.S. forces are already stretched thin by two wars -- 97,000 troops in Afghanistan and 47,000 in Iraq. Shouldering the bulk of costs in dollars and lives in both wars fought for Western interests -- let alone bearing primary responsibility for politically radioactive yet necessary missions like detention operations and interrogations -- our forces already have enough on their plate.

5 - It could be worse. It's worth noting that bad as Gadhafi is -- his order to sabotage Pan Am Flight 103 stands out as one of the most heinous cases of state terrorism in history -- it's always possible that we could end up with someone worse.

This week, Secretary of State Hillary Rodham Clinton told the House of Representatives Foreign Affairs Committee that "in the years ahead, Libya could become a peaceful democracy, or it could face protracted civil war." Even that presupposes that a democratic Libya would even be peaceful.

If history has taught us anything, it should be that democracies aren't necessarily peaceful -- particularly those with deeply troubled social and economic conditions.

Take Gaza: Once Palestinians had a chance to pick their leaders in 2006, they elected Hamas, a terrorist organization - which, when cut off from Western aid, fired rockets into Israel.

There's no question that Libya is in for a rough road ahead. U.S. military intervention in Libya would only make the journey worse.

======
J.D. Gordon is a communications consultant to several Washington, D.C., think tanks and a retired Navy commander who served in the office of the secretary of defense from 2005 to 2009 as the Pentagon's spokesman for the Western Hemisphere. For more info, see www.jdgordoncommunications.com.
Posted by Andrew Lubin at 11:36 AM