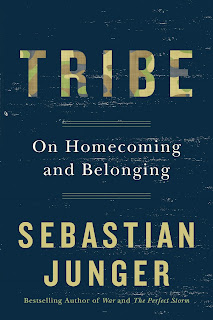 Best-selling author Sebastian Junger’s newest book ‘Tribe; On Homecoming and Belonging,’ has been published at a most appropriate time.

Where do people belong these days? Where do you go when times are tough? The answers used to be easy; during the Depression, churches and extended family helped those in need.WW2 gave us the brotherhoods of Leathernecks, Swabbies, GI’s, and Flyboys, who morphed postwar into either the white collar Corporation Man or the blue collar Steelworker, Autoworker, Craftsman. But the unifying factor was that everyone belonged somewhere; everyone counted to someone, everyone was a member of some sort of tribe.

However it’s different today, Junger says. Western society is changing, and not for the better. There is an upheaval today as technology, capital, and communications have converged to break down traditional society in ways that affect people’s sense of self-worth. Post-WW2 America equates personal success with wealth, so while Trump rants about trade pacts and jobs lost to China, and Hilary promises the biggest jobs program since WW2, no one discusses the more serious problem of how technology and robotics are permanently eliminating entire industries, which marginalizes those left jobless.

‘Tribe’ has a most interesting premise; that the smaller and simpler societies of the Indian tribes of long ago and the combat veterans of today, enjoy a more rewarding life than the ordinary civilian. Both offered something unique: a chance to prove one’s worth to those you deem important; an opportunity to measure yourself against those who came before you. People are accepted as-is, so long as they contribute to the common good.

However today there’s no longer a clear path to acceptance, Junger writes. The fast food and cashier jobs that taught teens a work ethic are disappearing as companies install self-service lanes. Varsity sports are on the decline, the sweat and training needed to set a personal best has been replaced by participation awards and team hugs. Even the coming-of-age first driver license has lost its importance as Millennials would rather text Uber than go through the aggravation of maintaining and driving their own car. The result is a society that makes it difficult to earn job experience and denigrates the value of competition by emphasizing feel-good events where preparation is an option.
This is a healthy society?

More difficult is finding an opportunity to become a man in a world where courage is considered an anachronism. When challenged on sacrifice by Khizr Khan, father of Army Captain Humayan Khan (KIA-Iraq), GOP presidential candidate Trump proudly replied ‘Oh I sacrificed a lot; I’m a businessman who worked long hours.” Really? Working late is not remotely the shared sacrifice of Iwo Jima, Khe Sanh, Fallujah, or the thousand other battles and firefights where American boys became men.

It’s interesting to note, Junger observes, how people seem to respond more favorably to tragedy than to pleasure; people clearly  remember where they were on 9/11, how they helped friends and strangers during Hurricane Sandy or Oklahoma tornadoes. During the London Blitz, Junger documents, suicide and depression rates dropped precipitously as Londoners fought to maintain normalcy in their lives. Germany’s civilian morale was equally strong; despite the horrific Allied bombing campaigns that targeted civilians, their industrial production increased significantly.

Are we stronger when we all pull together, as the Londoners proved to be? The Marines and Soldiers returning from Iraq and Afghanistan would say so; they know where they belong. They know the discomforts and other issues caused by deployment are more than balanced by the comradeship they found, the work ethic they honed, and maturity they earned. Sebastian Junger has raised important questions in his book ‘Tribe’, now how do we use it to start a national debate to find the answer for the rest of us?