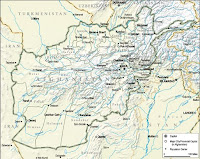 The al-Qaeda network is recruiting an increasing number of foreign fighters to mount a “counter surge” against Western troops arriving in time for the August elections in Afghanistan.

Uzbeks and European Turks are particularly prominent among foreign fighters joining significant numbers of Arab recruits to fight alongside the Taleban, according to Western officials and sources in the Afghan insurgency.

There are even reports of British Muslims on the battlefield, with one dead Taleban fighter in Helmand found recently sporting an Aston Villa football club tattoo. There have long been reports of English-speaking voices with identifiable British regional accents being monitored by military eavesdroppers in the province.

A Taleban commander in Helmand, who asked not to be identified, told The Times: “We have seen a 40 per cent increase in the number of foreign fighters this year in Helmand. They are mostly Pakistanis and Arabs but also Uzbek and Chechen.” Helmand has averaged more than ten attacks a day in the first half of the year, making it nearly two and a half times more violent than the next most Taleban affected province of the country.

Western officials have reported attacks on Taleban formations that included many Arabs, particularly in the province of Paktika, in south eastern Afghanistan, where 34 Arab militants died in a US bomb attack on May 28.

Significant numbers of Turkish militants have also been monitored in Farah Province and Uzbeks reported in numbers in Zabul, and Faryab and Badghis provinces in the north.
Posted by Andrew Lubin at 8:22 AM