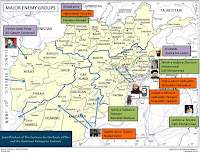 Photographer Emilio Morenatti and AP Television News videographer Andi Jatmiko were traveling with the military when their vehicle was struck by the bomb Tuesday.

Both were immediately taken to a military hospital in Kandahar. Jatmiko suffered leg injuries and two broken ribs. Morenatti, badly wounded in the leg, underwent an operation that resulted in the loss of his foot.

Morenatti, 40, a Spaniard, is an award-winning photographer based in Islamabad who has worked for the AP in Afghanistan, Israel and the Palestinian territories. He was named Newspaper Photographer of the Year in 2009 by Pictures of the Year International.

Jatmiko, 44, of Indonesia, has reported for the AP from throughout Asia for more than 10 years.

AP President Tom Curley said their injuries reflected "the risks that journalists like Emilio and Andi encounter every day as they staff the front lines of the most dangerous spots of the world. We are grateful for their bravery and their commitment to the news. Our hearts are with them and their families, especially Emilio's wife, Marta, and Andi's wife, Pingkan."

Journalists have faced increasing danger from roadside bombs as they go on assignment with Western troops carrying out new offensives as part of the effort by the United States and its allies to turn the tide of the Afghan war.

Eighteen journalists were killed in Afghanistan between 1992 and 2008, making it the 11th most dangerous country in the world for media workers, according to the Committee to Protect Journalists. At least one more has been killed this year.