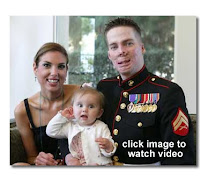 Love Pulls Him Through
Here is the story of Marine Corporal Aaron Mankin and his wife Diana.

Corporal Mankin was badly burned from an IED attack during an operation to stop insurgents flowing into Iraq from Syria. His vehicle was blown over 10 feet into the air. Afterwards, Mankin remembered “I opened my eyes and I realized I was on fire.”

Mankin was so badly burned that it was six weeks before he could even bear to look at himself in a mirror. But the turning point came when his sweetheart Diana accepted his marriage proposal from his hospital bed. “At that moment, I realized that I was still the same man inside,” he said later. That realization, and Diana’s consistent love for him -- sustained him through 30 reconstructive surgeries.

Aaron and Diana Mankin are now the proud parents of a beautiful baby girl. Of his injuries, Mankin says they help him appreciate what he has been given. “I work harder at loving my daughter because of my injuries,” Mankin says,” I want her to see my scars as an advantage.”

(Taken from Great Americans, Vienna, Va)
Posted by Andrew Lubin at 9:29 AM