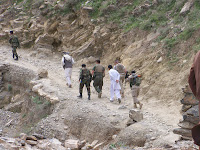 Growing Dissatisfaction Among The Troops

SHANNON BREAM: The U.S. military says an American service member was killed today in a bomb blast in Afghanistan, making August the deadliest month for U.S. forces since the war began.

National security correspondent Jennifer Griffin reports on growing dissatisfaction among the troops with one of the rules they have to live and possibly die by.

JENNIFER GRIFFIN: Not only did U.S. forces in Afghanistan inherit an enemy they cannot see, but now these troops are finding they’re required to hand over insurgents to Afghan authorities within 96 hours or release them, according to a restrictive rule agreed to by NATO member states and inherited by Gen. Stanley McChrystal.

According to one top U.S. commander in Afghanistan, quote, “It is a big limitation. In COIN [counterinsurgency operations] not being able to detain individuals to conduct interrogations and follow on exploitation is very restrictive. Something that we didn’t have to worry about in Iraq.”

MAJ. GEN. ROBERT SCALES (RET.) [Fox News Military Analyst]:This 96-hour NATO rule is driving the troops nuts. They call it the revolving door problem. And it goes like this: They’ll capture a prisoner and they have 96 hours to turn him over to the Afghan authorities.

GRIFFIN: Marines in Southern Helmand Province are balking and in some cases, Fox has learned, are stalling or refusing to send helicopters to pick up a detainee, knowing he will be released.

SCALES:The problem with that, particularly in the south, is that often it’s a 24-hour effort just to get a prisoner by helicopter to the Afghan authorities. In addition to that, the troops don’t have enough time to interrogate these prisoners when they follow the rules. And so what happens all too often is they’ll take a prisoner who knows something and they’ll put him on a helicopter and watch the information fly away. It’s absolutely outrageous.

GRIFFIN: A Marine spokesman in Afghanistan adds, quote, “The routine logistics of transporting people and materiel are extremely challenging. So the time-sensitive requirement for moving detainees adds another challenge to a situation that’s already pretty tough.”

McChrystal’s strategy review will be released by the Pentagon next week, but I’m told it does not demand the 96-hour rule be changed, even though it hampers U.S. troops’ ability to fight and win.

At the Pentagon, Jennifer Griffin, Fox News.
Posted by Andrew Lubin at 9:05 AM