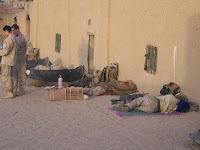 KHAN NESHIN, Afghanistan — American Marines secured this desolate village in southern Afghanistan nearly two months ago, and last week they were fortifying bases, on duty at checkpoints and patrolling in full body armor in 120-degree heat. Despite those efforts, only a few hundred Afghans were persuaded to come out here and vote for president on Thursday.

In a region the Taliban have lorded over for six years, and where they remain a menacing presence, American officers say their troops alone are not enough to reassure Afghans. Something is missing that has left even the recently appointed district governor feeling dismayed. “I don’t get any support from the government,” said the governor, Massoud Ahmad Rassouli Balouch.

Governor Massoud has no body of advisers to help run the area, no doctors to provide health care, no teachers, no professionals to do much of anything. About all he says he does have are police officers who steal and a small group of Afghan soldiers who say they are here for “vacation.”

It all raises serious questions about what the American mission is in southern Afghanistan — to secure the area, or to administer it — and about how long Afghans will tolerate foreign troops if they do not begin to see real benefits from their own government soon. American commanders say there is a narrow window to win over local people from the guerrillas.

Securing the region is overwhelming enough. The Marines have just enough forces to clear out small pockets like Khan Neshin. And despite the Americans’ presence, Afghan officials said 290 people voted here last week at what is the only polling place in a region the size of Connecticut. Some officers were stunned even that many voted, given the reports of widespread intimidation.

Even with the new operation in Helmand Province, which involves the Marines here and more than 3,000 others as part of President Obama’s troop deployments, the military lacks the troop strength even to try to secure some significant population centers and guerrilla strongholds in central and southern Helmand.

And they do not have nearly enough forces to provide the kinds of services throughout the region that would make a meaningful difference in Afghans’ lives, which, in any case, is a job American commanders would rather leave for the Afghan government.

Meanwhile, Afghans in Khan Neshin, the Marines’ southernmost outpost in Helmand Province, are coming to the Americans with requests for medical care, repairs of clogged irrigation canals and the reopening of schools.

“Without the Afghan government, we will not be successful,” said Capt. Korvin Kraics, the battalion’s lawyer, who is in Khan Neshin. “You need local-level bureaucracy to defeat the insurgency. Without the stability that brings, the Taliban can continue to maintain control.”

Local administration is a problem throughout Afghanistan, and many rural areas suffer from corrupt local officials — if they have officials at all. But southern Helmand has long been one of the most ungovernable regions, a vast, inhospitable desert dominated by opium traffickers and the Taliban.

Governor Massoud said he personally admired the Marines here, from the Second Light Armored Reconnaissance Battalion, but he said many people “just don’t want them here.”

He estimated that two of every three local residents supported the Taliban, mostly because they make a living growing poppy for the drug trade, which the Taliban control. Others support them for religious reasons or because they object to foreign forces.

Not least, people understand that the Taliban have not disappeared, but simply fallen back to Garmsir, 40 miles north, and will almost surely try to return.

Lt. Col. Tim Grattan, the battalion commander, said the local residents’ ambivalence reflected fears of what could happen to anyone who sided with the Marines, an apprehension stoked by past operations that sent troops in only for short periods.

“They are on the fence,” Colonel Grattan said. “They want to go with a winner. They want to see if we stay around and will be able to protect them from the Taliban and any repercussions.”

As for follow-up assistance, Colonel Grattan said the Afghan national government “has been ineffective to date.”

The shortfall in Afghan government support is important not only in terms of defining the Marines’ mission here, but also because it crimps their operations.

The Marines, unlike units in some other regions, answer to a NATO-led command and are under orders to defer to Afghan military and civilian officials, even if there are none nearby.

For instance, Marines must release detainees after 96 hours or turn them over to Afghan forces for prosecution, even if the nearest prosecutors or judges are 80 miles away. Some detainees who the Marines say are plainly implicated in attacks using improvised explosive devices or mortars have been released.

The problems are compounded by a shortage of American troops, despite the recent reinforcements. The Marine battalion, which deployed with less than 40 percent of its troops, can regularly patrol only a small portion of its 6,000-square-mile area.

To do even that they have stretched: three-fifths of the Marines are stationed at checkpoints and a handful of austere outposts ringing Khan Neshin, living without air-conditioning or refrigerated water.

If the Afghan national government can provide more resources and security forces — and the Marines add more men — then the United States may be able to leave in two to three years, Colonel Grattan said.

Without that, he said, it could take much longer. For now, little help is materializing.

He said he was promised 120 police officers, but only 50 showed up. He said many were untrustworthy and poorly trained men who stole from the people, a description many of the Americans agree with. No more than 10 percent appear to have attended a police academy, they say. “Many are just men from the streets,” the governor said.

The Afghan National Army contingent appears sharper — even if only one-sixth the size that Governor Massoud said he was promised — but the soldiers have resisted some missions because they say they were sent not to fight, but to recuperate.

“We came here to rest, then we are going somewhere else,” said Lt. Javed Jabar Khail, commander of the 31-man unit. The Marines say they hope the next batch of Afghan soldiers will not be expecting a holiday.

In the meantime, at the local bazaar, just outside the Marines’ base, the foreign troop presence remains a hard sell.

When one man, Abdul Hanan, complained that “more people are dying,” First Lt. Jake Weldon told him that the Taliban “take away your schools, they take away your hospitals; we bring those things.”

Mr. Hanan remained doubtful. Some people have fled the area, fearful of violence since the Marines have arrived. He asked, “So you want to build us a hospital or school, but if nobody is here, what do we do?”
Posted by Andrew Lubin at 8:28 AM