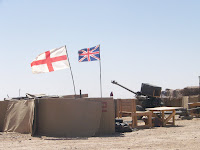 KABUL – The Taliban have advanced out of traditional strongholds in Afghanistan's south and east, gaining the upper hand as they moved into the north and west, the top U.S. and NATO commander said in an interview on Monday.

U.S. Army General Stanley McChrystal, who will soon present an assessment of the war, said the resurgent Taliban have forced a change of tactics on foreign forces and warned that record casualty figures would remain high for some months.

"It's a very aggressive enemy right now," McChrystal told The Wall Street Journal newspaper in an interview in Kabul. "We've got to stop their momentum, stop their initiative. It's hard work."

Violence across Afghanistan this year had already reached its worst levels since the Taliban were ousted by U.S.-led Afghan forces in 2001 and escalated dramatically after major offensives were launched in southern Helmand province in July.

Attacks have also become increasingly brazen, with suicide bombers and gunmen attacking government buildings, as well as Afghan and foreign and military targets, in the east and south in the past month.

With thousands of U.S. Marines and British soldiers aiming to push Taliban fighters out of populated areas in Helmand, July quickly became the deadliest month of the war for troops in the country.

Britain has also suffered its worst battlefield casualties in almost a generation, with 22 killed in July, raising questions about whether its troops are adequately supplied, how long they will be in Afghanistan, or whether they should be there at all.

There are now about 101,000 foreign troops in Afghanistan, with U.S. numbers at about 62,000. Washington has been pouring in thousands of extra troops this year, in part to help secure August 20 presidential and provincial council elections.

Washington plans to increase the number of its troops to about 68,000 by year's end, more than double the 32,000 it had stationed in Afghanistan at the end of 2008.

This includes several thousand designated to help train Afghan security forces, with some U.S. and other foreign commanders questioning the paucity of Afghan involvement in the Helmand campaigns so far.

McChrystal said he wanted a "very significant expansion" of the Afghan army and police, The Wall Street Journal reported.

McChrystal said he planned to push more troops into Kandahar, the spiritual home of the Taliban adjacent to Helmand.

He said some 4,000 U.S. troops still to arrive would be deployed to Kandahar. "It's important and so we're going to do whatever we got to do to ensure Kandahar is secure," he said.

He defended the choice of Helmand to launch the attacks against the Taliban because it is Afghanistan's biggest producer of opium poppies which help fund the insurgency.
McChrystal also said some other troops would also be redeployed from sparsely populated areas to more heavily populated areas.
Posted by Andrew Lubin at 8:43 AM