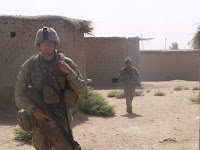 MIANPOSHTEH, Afghanistan -- In this harsh and unforgiving part of southern Afghanistan, where thousands of U.S. Marines are battling the Taliban this summer, the growing prevalence of roadside bombs means that even a small mishap can have deadly consequences.

Made primarily of large quantities of homemade explosives, the bombs have killed at least a third of the 16 Marines who have died in Helmand since they launched their offensive in early July. The ever-present threat has made the U.S. push in the southern Helmand River valley tougher than U.S. commanders initially anticipated; Marines have seized vital crossroads and population centers, only to discover that Taliban insurgents had filled in the dirt roads behind and around them with bombs.

The bombs have forced Marine commanders to put long stretches of road off-limits, requiring troops to walk instead of drive. Marines on foot patrol must keep a keen eye out for dug-up dirt and "ant trails" that could cover a wire.

All of that has made for delays in supplying the troops -- and, as one Marine company discovered in late July when its mission went badly off-track, it has also required a diversion of manpower to the mundane b ut vital task of watching the roads, hoping to ambush anyone who attempts to plant a bomb.

"The explosion ripped the Humvee in half," whispered Lance Cpl. Jan Friis, 22, of Bethesda, whose best friend, Lance Cpl. Jeremy S. Lasher, was killed when a bomb blew to pieces the vehicle he was driving.

The attack that killed Lasher came on July 23, when a team from 2nd Battalion, 8th Marine Regiment had set out to recover a mine-resistant vehicle that had become stuck in a canal.

The Marines' Echo Company outpost is located in Mianposhteh, a cluster of villages deep in the Helmand River valley that is accessible only by two main roads. The roads are little more than dirt paths criss-crossed by a latticework of irrigation canals and ditches, too fragile to support the Marines' heavy armored vehicles, like the one that had become stuck.

Lasher, 27, of Oneida, N.Y., and three other Marines were returning from getting chains to tow the vehicle when the blast went off under their Humvee. Soon the word came over the radio: "Four urgent. Launch the birds."

When Lance Cpl. Kyle Castle arrived to help treat the casualties, the status had changed to "two urgent, two unknown." He asked Lance Cpl. Jeremy Dones where Lasher was, and Dones pointed to the other side of the canal, scattered with pieces of a flak vest and uniform. Castle, 24 of Everett, Wash., started to head across, but Dones just shook his head.

The gunner, Lance Cpl. Dominic Davila, had a shattered lower right leg. Castle and others had to hold Davila down to make sure the tourniquet that had been hastily applied was tight enough. Then, when lifting Davila onto the stretcher, Castle discovered another large hole in his left leg, and stuffed it with bandages to stop the bleeding. The treatment saved Davila's life, officers said later.

When Friis arrived to guard the area, Marines were searching for Lasher's body and loading Davila and two other wounded onto! a helicopter. Lance Cpl. Trevor Paar had been blown from the Humvee; he suffered a severe head injury but survived. But vehicle commander Cpl. Nicholas G. Xiarhos, 21, of Yarmouth Port, Mass., died soon afterward.

A few hours later, at a larger Marine base 15 miles north, 2nd Lt. Brendan J. Murphy was preparing for another precarious run transporting supplies to Mianposhteh. The trip was urgent. Echo Company was almost out of packaged meals known as Meals Ready to Eat, and was rationing food. Fuel was low.

Now Murphy was given an even more dangerous assignment: recover the vehicles at the bomb site.

At 4 the next morning, Murphy, a young officer with a shaved head and a face worn from stress, briefed the Marines in his convoy on what to expect.

"They know we're coming into the area to do the recovery," he said, predicting an attack near the bomb site. "Be aggressive on the weapons systems."

Murphy's plan was to situate part of the convoy on desert high ground in a 360-degree defense, ! not unlike a wagon train circled on the frontier, while he led a team to recover the destroyed Humvee. As a final caution, he had the Marines repeat in unison how to respond when an unknown vehicle approached. First came a verbal order to halt, followed by warning shots. Finally, at a certain proximity, they were authorized, in their words, to "waste" the driver.

As a pale pink spread across the sky, the convoy rolled out the gates of Forward Operating Base Delhi in a cloud of dust to cover what should have been a 15-mile trip south to the scene of the bombing, near Mianposhteh. But the circuitous journey took more than 16 hours. Forced to detour because of soft sand, the convoy didn't arrive until 9 a.m. After circling the vehicles, Murphy left to carry out the recovery mission half a mile away, while the rest of the Marines waited in the desert as the heat rose to 115 degrees.

Among those on watch were Lance Cpl. Leo Robinson, 22, of Elyria, Ohio, and Lance Cp! l. Michael Barton, 21, of Troy, Pa., both of whom had suffered from he atstroke in the initial days of fighting and were only now returning to their unit.

"I was in a machine-gun bunker. I felt numbness from head to toe, fell backwards, and my muscles seized up," Robinson said. After about three weeks of "light duty," he and Barton were deemed well enough to return to the front lines, but doctors warned that they would be more vulnerable to heatstroke in the future.

"It's killing me. It's too hot," Barton said as he sat in a seven-ton truck, staring out over the monotonous, disorienting expanse. At about 11:30 a.m., the call came to mount up and prepare to leave. Minutes later, a loud explosion rippled over the sand. Murphy's team, approaching the blast site, had been hit by a bomb.

Capt. David Snipes, commander of the battalion's weapons company, was inside the hulking mine-resistant vehicle when it struck the bomb. The impact was like "hitting a brick wall," Snipes recalled later. The vehicle reared up and crashed back down.

Making his way through choking dust to open the rear hatch, Snipes was amazed to see the vehicle's 50-caliber machine gun sitting in the sand. "The 50-cal somehow went from the mount, past [the gunner's] head, and landed behind us," said Snipes. Surprisingly, the gunner was not badly injured. Murphy and his crew soon began the painstaking work of loading the twisted skeleton of the Humvee onto a recovery vehicle, and hooking up the mine-resistant truck -- now useless and missing a front wheel -- to be towed.

Logistical Challenges
Standing by the wreckage the next morning, Murphy explained that while several vehicles have been destroyed this way, the logistical challenges mean that replacements are slowly arriving. Indeed, Castle said Lasher and the other Marines had had to ride in a Humvee because one of their team's mine-resistant vehicles had been disabled. "If they had been in an MRAP, they probably all would have survived," Castle said.

Even as losses from roadside bombs mount, Marine commanders know they can bypass main roads for only so long. It is a matter of time, they say, before insurgents target the desert routes and foot patrols. Ultimately, they know the solution lies in dismantling the networks of Taliban bombmakers, and that, in turn, will come only with help from a wary Afghan population.

For now, if units such as Echo Company want to travel even small stretches of road, they must commit to the manpower-intensive work of keeping watch 24 hours a day. As they scrutinized the moonlit road leading to the desert last week, Friis and the other Marines reflected with some bitterness over the loss of their friends, and questioned whether many Americans appreciate -- or even know of -- their daily grind in the windswept purgatory of Helmand.

"People need to know these guys were heroes. They were fighting so the people living in Potomac and Fairfax in their million-dollar houses don't have to," said Friis, a dark-haired, soft-spoken enlistee who is the dog handler for a bomb-sniffing black lab named Jenny.

Paar and Davila, who had a leg amputated, are recovering at the National Naval Medical Center in Bethesda. Xiarhos's wake was recently held in Massachusetts.

As for Lasher, hundreds of mourners lined the streets of Oneida when the motorcade returned his body Thursday, and later filled a church for his funeral on Saturday. "All he wanted in life was to be a good husband and a good father," Friis said of his buddy, who had a 1-year-old son born when Lasher was in Iraq. "He was the best person I've ever known."
Posted by Andrew Lubin at 9:30 AM