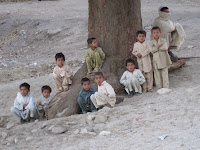 Why The Taliban Is Gaining Ground In Afghanistan

The Taliban today in Afghanistan is a markedly different movement from that of those warriors whose one-eyed leader, Mullah Omar, riding on a motorcycle, escaped capture from American forces in Kandahar in December 2001. Mullah Omar is still their leader, even though, as a senior Afghan intelligence official told TIME, he is thought to be hiding across the border in Pakistan, moving between the towns of Quetta and Zob in the scorched Baluchistan desert. Nowadays, though, the Taliban encompasses a vast and disparate array of players. A look at who they are is key to understanding why they are gaining ground against 63,000 U.S. troops and their NATO partners after eight years of guerrilla war.

The Taliban is not monolithic. It composed of several layers: a hard-core group of former Taliban commanders (including Mullah Omar) who operate out of sanctuaries across the border in Pakistan and who maintain ties with Pakistan's ISI intelligence agency (though Islamabad vehemently denies this); bands linked to al-Qaeda whose ranks have recently swelled with Arab, Chechen and Uzbek fighters operating in the craggy, northeastern ranges of Afghanistan; and, a last group, probably the largest, made up of local tribesmen who have allied themselves loosely with the Taliban as a result of President Hamid Karzai's often corrupt provincial officials pitting one tribe against another. Mullah Salam, a tribal elder from Helmand province, scene of heavy fighting between Taliban and NATO forces, told TIME why he switched to the Taliban: "Karzai's people made promises to me, and I in turn made them to my tribe, but these were never honored." This last segment of the Taliban is also made up of those seeking justice against NATO forces, a roster likely to grow after coalition jets killed over 30 villagers in Kunduz who were filling up fuel from hijacked NATO tankers.

Western military officials, diplomats and Afghan officials interviewed by TIME all agree that the battle with the Taliban is entering a critical phase, especially after the Aug. 20 presidential elections marred by fraud. Karzai's credibility is now damaged. After 30 years of war, Afghans have developed a sixth sense about survival: they can detect subtle shifts of power. Rarely do they have qualms about changing to the winning side, even in midconflict. In an essay on the Taliban for Foreign Affairs magazine, Afghanistan expert Michael Semple and MIT political scientist Fotini Christia write: "Changing sides, realigning, flipping — whatever you want to call it — is the Afghan way of war."

And right now, that Afghan sixth sense is telling them that the U.S. and the other Western nations are losing the heart for battle. In the Pashtun strongholds of Afghanistan, it is now perceived to be a good idea for a tribe to start siding with the Taliban, even though members of the tribe may not agree with their harsh medievalism. A critical mass is gathering, experts say. Elders who belong to once neutral tribes in Kandahar province are now telling their youths to take up arms against the foreign invaders, as their fathers did back in the 1980s against the Red Army. In Tahkt-e-Pul, on the edges of Kandahar city, an influential mullah recently refused to preside over the funeral of a dead Afghan government soldier, a local boy; meanwhile a Taliban, who died fighting the Americans or the British, was honored as a brave martyr. It is a disturbing change among Afghans who in 2001, after the benighted years of the Taliban, welcomed foreigners bringing aid and progress.

The Taliban is surging into the vacuum created by Karzai's government, which is based on patronage rather than competence, coupled with the international community's often bungled and chaotic distribution of aid. One indication of how far the Taliban have come: this summer, Mullah Omar tried to consolidate his grip on his unruly commanders with a 13-page Code of Conduct (among the rules: no senior government officials are to be executed without his say-so, and civilian casualties must be minimized when attacking foreign troops). In large swathes of the southern provinces of Helmand, Kandahar, Zabol, Oruzgan, Paktia and Paktika, a shadow Islamic republic of the Taliban already exists, with governors, a radio station, law-enforcing militias and courts. In recent months, the Taliban opened a northern front in Kunduz, Baghlan and Badakshan provinces, with a strong contingent of al-Qaeda foreigners among them, according to senior Afghan officials. In all these areas, a new saying prevails: "Government courts for the rich (because the judges are bribable), Taliban justice for the poor." And Taliban justice, they say, is usually more swift and fair.

But a Taliban win is not necessarily inevitable. Non-Pashtuns like the Tajiks, Hazaras and other minorities are certainly resisting a return of the Taliban; the parts of the country that they dominate, including sections of central and northern Afghanistan, are relatively peaceful. Also, while American and European casualties may be rising — 810 U.S. servicemen have died so far in the eight-year conflict — so has the number of Taliban deaths. Dozens of Taliban are killed every week.

Meanwhile, the Pakistani comrades of the Afghan Taliban are now locked in battle with the Pakistani army, and this has slowed the number of Pakistani volunteers infiltrating across the border to kill American soldiers. These frontier Pashtun tribesmen, who once provided the Afghans with a steady flow of weapons, young fighters and suicide bombers, are suddenly too pinned down to give anything but a trickle of support. Mullah Omar and the other members of the so-called Quetta Shura, or military council, have stayed on the sidelines for fear of losing their covert support from the Pakistani military and the ISI, who hate Karzai and his northern allies and want to see the Taliban back in power and the NATO forces gone from Afghanistan.

Says one top Afghan official: "We and the Americans gave the Pakistanis the addresses of madrasahs [religious schools] where the Taliban are training young recruits and suicide bombers, but the ISI refuses to act." Now that Pakistani authorities are finally realizing that support of an Islamist revival in Afghanistan comes with its own risks at home, that attitude may start to change. Only with the loss of his Pakistani sponsors can Mullah Omar and his Taliban be coaxed into striking a truce with Karzai.
Posted by Andrew Lubin at 8:37 AM