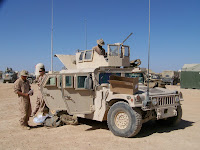 The U.S. patrol had a tip that Taliban fighters were lying in ambush, and a Marine had his weapon trained on the trees 70 yards away. "If you see anything move from there, light it up," Cpl. Braxton Russell told him.

Thirty seconds later, a salvo of gunfire and RPGs - rocket-propelled grenades - poured out of the grove. "Casualty! We've got a casualty!" someone shouted. A grenade had hit Lance Cpl. Joshua "Bernie" Bernard in the legs.

A Marine and son of a Marine, a devout Christian, Iraq war veteran and avid hiker, homeschooled in rural Maine, Bernard was about to become the next fatality in the deadliest month of the deadliest year since the U.S.-led invasion of Afghanistan in 2001.

The troops of Golf Company, 2nd Battalion, 3rd Marines, had been fighting for three days to wrest this town in southern Afghanistan from the Taliban who had ruled it for four years. As dusk approached on Aug. 14, things had quieted down. The Taliban seemed to have gone. Another day had passed in the long, hard slog for U.S. troops serving on the plains and mountains of Afghanistan, in a war that has steadily intensified.

Then, as the Marines were enjoying some downtime, reports of mortar, machine-gun and sniper fire sent them scrambling again. The 11 Americans and 10 Afghan soldiers edged their way into the town's abandoned bazaar.

Eyes scanning rooftops for gunmen and the ground for buried bombs, the patrol pushed past shops still smoldering from U.S. mortar shells, past Taliban posters on the walls exhorting the populace to fight the Americans. Bernard, his face daubed in gray and brown camouflage paint, was the point man.

A young Afghan in front of the family store showed the patrol a patch of upturned earth in a ditch. It was here that insurgents had fired their mortars a few minutes earlier. "But don't say I told you, or they'll kill me," the man said.

As he spoke, the Marines got word of the ambush being readied nearby. Two Cobra helicopters circling overhead fired Hellfire missiles at a mortar position. The Marines weren't sure this had settled the matter with the Taliban. They pushed on.

They reached the pomegranate grove.

At first, Jake Godby thought Bernard had stepped on an explosive device. Godby, 24, a 2nd lieutenant from Fredericksburg, Va., quickly regrouped his men and directed the returning fire.

The squad found itself stuck under sustained and heavy fire with a wounded man on a narrow crossroad - buildings behind them, insurgents hidden in the orchard in front of them, and a large puddle from a broken water pump in the middle. Godby had the troops advance to the cover of a mud wall and an irrigation ditch. The orange streaks of bullets whizzing in every direction grew visible as the light faded.

"That's when I realized there was a casualty and saw the injured Marine, about 10 yards from where I'd stood," Associated Press photographer Julie Jacobson would write in her journal. Jacobson, AP correspondent Alfred de Montesquiou and AP Television News cameraman Ken Teh had accompanied the patrol.

"For the second time in my life, I watched a Marine lose his," Jacobson would write. "He was hit with the RPG, which blew off one of his legs and badly mangled the other. I hadn't seen it happen, just heard the explosion. I hit the ground and lay as flat as I could and shot what I could of the scene."

Bernard lay on the ground, two Marines standing over him exposed, trying to help. A first tourniquet on Bernard's leg broke. A medic applied another.

"I can't breathe, I can't breathe," Bernard said. Troops crawling under the bullets dragged him to the MRAP, a mine-resistant armored vehicle that accompanied the patrol.

"The other guys kept telling him 'Bernard, you're doing fine, you're doing fine. You're gonna make it. Stay with me Bernard!' A Marine held Bernard's head in his hands when he seemed to go limp and tried to keep him awake. A couple more ran in with a stretcher," Jacobson recalled in the journal.

"Another RPG hit the mud wall on the other side of the street from where we were, about 5 yards away. It was a big BOOM, and I just lay my face in the dirt and everything went quiet for about 10 seconds. It w! as just silence like I was wearing noise-canceling headphones or like world peace had finally descended upon the Earth. The air was white with sand. Then I started feeling the rubble fall down around me. And I thought, 'Is this what it's like to be shell-shocked? Am I all still here? I can't believe I am.'

"I was fine and surprised at how calm I was and that I could actually still hear."

The bad news
The rocket-propelled grenade exploded in a powerful pinkish blast, lighting up the scene and briefly knocking out de Montesquiou and SSGT Alexander Ferguson. When Ferguson recovered, he helped haul Bernard inside the vehicle. Bernard was driven back to base about 500 yards from there, receiving first aid along the way. Minutes later, a helicopter evacuated him to Camp Leatherneck, the main Marine compound in southern Afghanistan. His vital signs were stable when he left.

At the ambush site, the fighting continued uninterrupted for 10-15 minutes. The men could see the grenades coming in at them, and even some of the machine gunners. They estimated they were facing six to eight fighters.

Adding to the confusion, an Afghan soldier with the troops fired his own grenade at the insurgents, but he hadn't checked whether anybody was close by. A Marine was knocked out by the back-blast.

Another grabbed the Afghan by the collar. "Once he stopped shooting, we were able to get control of the situation," Russell said.

Some Marines are uneasy patrolling with the Afghan National Army. For one thing, there's a language barrier. During the shootout at the orchard, the patrol's Afghan interpreter disappeared and took cover, leaving the Marines unable to coordinate their moves with the Afghan soldiers.

"They're not lacking courage, they're just lacking training right now," said Russell, 22, from Stafford, Va. "At least they were shooting in the right direction."

The fighting ebbed with nightfall. Godby and some of the Marines equipped with night-vision glasses pushed deeper into the orchard, but the insurgents were gone. Intelligence pointed to three enemy dead, several Marines said, but it could not be confirmed.

That night, officers assembled the platoon in a darkened room of the run-down house where the Marines had camped after taking Dahaneh two days earlier. There the officers delivered the news: Bernard had died of a blood clot in his heart on the operating table. He was Golf Company's third fatality since arriving in Afghanistan in May.

Bernard was the 19th American to die in Afghanistan in August. Fifty-one Marines, soldiers and seamen lost their lives that month. Of the 739 Americans killed in and around Afghanistan since 2001, 151 died last year and 180 so far this year.

'A very strong faith'
Down a rural dirt road in New Portland, western Maine, John and Sharon Bernard sat on their porch and talked about their son.

Joshua, they said, loved literature and showed early interest in the Bible and Christianity. "He had a very strong faith right from the beginning," his mother said.

His father described him as "humble, shy, unassuming - the very first to offer help." He didn't smoke or drink, and always opened the door for others. His main friends were his church group, whom he would visit when on leave, and his sister Katy, 20.

Bernard's father is a retired Marine 1st sergeant. Three weeks before the Aug. 14 ambush that killed his son, he had written to his congressman, Rep. Michael Michaud, expressing frustration at what he described as a change in the Afghanistan rules of engagement to one of "spare the civilians at all cost." He called this "disgraceful, immoral and fatal" to U.S. forces in combat.

Joshua loved video games and snowboarding, and hiked parts of the Appalachian Trail with his father. He hoped to become a U.S. marshal. "Service and personal honor," is how his father summarized his son.

Determined man takes the point
Three days after Bernard's death, as his belongings were being packed for shipment to his family, Cpl. Joshua Jackson, his squad leader, still was referring to him in the present tense.

"He definitely doesn't hesitate," said Jackson, 23, from Copley, Ohio. "He's very good, he definitely has the nerves to do what he's needed to do."

He called Bernard "a true-heartedly very good guy; probably one of the best guys I've known in my entire life."

The hardest part is "just wondering if there's something that I could have done different, or maybe prevented him from dying," Jackson said. "But that's something we've all got to deal with."

"I think it's got to do with being a Marine; you just carry on," said Godby. That night he got two hours of sleep. Before dawn, his platoon took part in a raid on a suspected Taliban stronghold.

Bernard was determined, his comrades said. That's why he was chosen as the squad's point man and navigator, moving at the front of his unit.

Lance Cpl. Jason Pignon, 22, from Thayer, Ill., was his close friend. They had been in the same platoo n since 2007 when they joined "The Fleet," as Marines call the units preparing to deploy. They served together near Fallujah in Iraq in 2008, and again in Afghanistan.

During the firefight, Jacobson had wrestled with a question every war photographer faces: whether to offer to help save a life, or keep out of the way of the professionals and go on shooting pictures. She wondered whether the Marines would be upset that she went on photographing.

Some of Bernard's comrades asked to see the photos. In her journal she described them flipping through the images she had captured that day:

"They did stop when they came to that moment. But none of them complained or grew angry about it. They understood that it was what it was. They understand, despite that he was their friend, it was the reality of things."

It had all gone very quickly. It was late afternoon when the Taliban fired their first RPGs. It was dusk when ! the Marine was driven away in the armored vehicle. And it was night when the patrol returning to base saw the dark silhouette of the helicopter that flew him away.