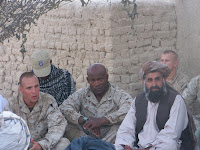 Advisers To Obama Divided On Size Of Afghan Force

WASHINGTON — The military’s anticipated request for more troops to combat the insurgency in Afghanistan has divided senior advisers to President Obama as they try to determine the proper size and mission of the American effort there, officials said Thursday.

Even before the top commander in Afghanistan submits his proposal for additional forces, administration officials have begun what one called a “healthy debate” about what the priorities should be and whether more American soldiers and Marines would help achieve them.

Leading those with doubts is Vice President Joseph R. Biden Jr., who has expressed deep reservations about an expanded presence in Afghanistan on the grounds that it may distract from what he considers the more urgent goal of stabilizing Pakistan, officials said. Among those on the other side are Richard C. Holbrooke, the special representative to the region, who shares the concern about Pakistan but sees more troops as vital to protecting Afghan civilians and undermining the Taliban and Al Qaeda.

Secretary of State Hillary Rodham Clinton has been vocal in favor of more troops, and while some officials said she had not shown her hand during the current deliberations, they expected her to be an advocate for a more robust force.

Defense Secretary Robert M. Gates has voiced concern that putting so many troops in Afghanistan would make the United States look like an occupier, but during a news conference on Thursday he sounded more supportive of the prospect.

“There is a unanimity of opinion about what our objective is, and the objective is to disable and destroy Al Qaeda and remove that threat to our national security,” said David Axelrod, the president’s senior adviser. “Obviously, there are a variety of opinions about how best to achieve that objective, and it’s valuable and important to hear those views.”

The emerging debate follows the delivery Monday of a new strategic assessment by Gen. Stanley A. McChrystal, who took over all American and NATO forces in Afghanistan in June. Mr. Gates has now forwarded the general’s report of about 25 pages to Mr. Obama.

Although General McChrystal included no specific force proposals in his review, officials expect him to send a separate request in the coming weeks. Military strategists, including one who has advised General McChrystal, said he might offer three options. The smallest proposed reinforcement, from 10,000 to 15,000 troops, would be described as the high-risk option. A medium-risk option would involve sending about 25,000 more troops, and a low-risk option would call for sending about 45,000 troops.

Geoff Morrell, the Pentagon press secretary, cautioned that talk about troop levels was speculation. “Anyone who tells you that they know how many troops the commander is going to ask for and the options he may or may not present doesn’t know what he’s talking about, because that has not been determined yet,” Mr. Morrell said. He said that Mr. Gates had not made up his mind about what he would recommend to the president.

Mr. Gates could be the key adviser on this decision, and some military analysts predicted that he might recommend what Pentagon officials call the “Goldilocks option” — the medium-risk one in the middle. Because he was first appointed by President George W. Bush, Mr. Gates could provide political cover for Mr. Obama should the president reject the biggest possible buildup.

Mr. Gates has long been worried that a large number of American forces would alienate the Afghan population. But at a news conference with Adm. Mike Mullen, the chairman of the Joint Chiefs of Staff, Mr. Gates said Thursday that his concerns about the American “footprint” had been mitigated by General McChrystal, who has indicated that the size of the force is less important than what it does.

“Where foreign forces have had a large footprint and failed, in no small part it has been because the Afghans concluded they were there for their own imperial interests and not there for the interests of the Afghan people,” Mr. Gates said. But he said that General McChrystal’s emphasis on reducing civilian casualties and interacting more with Afghans “has given us a greater margin of error in that respect.”

Mr. Obama has already ordered 21,000 additional troops to Afghanistan this year for a total American force of 68,000, on top of 40,000 NATO troops. Mrs. Clinton and Mr. Holbrooke pushed for those reinforcements, while Mr. Biden resisted. “It is true that Hillary was very forceful; I had some disagreement in degree with her,” Mr. Biden later told USA Today. “The president ended up landing on a spot that was where she was.”

Mr. Biden has argued that a sizable increase in resources for Afghanistan invariably means less for Pakistan, a concern born out of his frustration as a senator during the Bush administration pushing for more aid to Islamabad. In some ways, he has told colleagues, Pakistan is more important than Afghanistan because extremism is on the rise there, Al Qaeda has operating room and the government of Pakistan, a nuclear-armed nation, remains vulnerable.

Other American officials said they worried that General McChrystal simply did not have enough forces to turn around Afghanistan. Mr. Holbrooke just returned from Afghanistan, where he heard from military officers who said they needed more help to execute General McChrystal’s strategy of protecting the population from the Taliban, rather than just hunting militants.

As the president’s senior uniformed adviser, Admiral Mullen has said he worries about the impact of a buildup on the nation’s already stretched armed forces. In July, Mr. Gates announced a temporary increase of 22,000 troops in the size of the Army.

Mediating the debate will be Gen. James L. Jones, the national security adviser. “My job is to make sure the process works the way the president wants and everybody is at the table,” he said. “I try to be open-minded and not prejudice anything.”

He said he would ensure that dissidents got to voice their views to Mr. Obama. “He encourages vigorous debate,” General Jones said. “The thing not to do in a meeting with the president is to sit on your hands and hope you don’t get called on, because that’s a guarantee that you’re going to get called on.”
Posted by Andrew Lubin at 7:47 AM