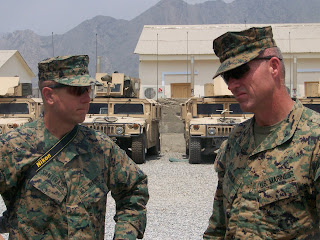 At the current rate the U.S. military will not leave Afghanistan — ever. After eight years of dedicated effort, billions of dollars in training and investment, and numerous advisers killed or wounded, there is still not a single province where the Afghan National Army (ANA) is entirely responsible for security.

The American troop withdrawal will largely be determined by how well the ANA provides security within its borders and creates a safe environment for the government of Afghanistan to effectively govern. Today, the ANA relies too heavily on American forces that are all too willing to bear the brunt of the fighting.

The Afghan government and In ternational Security Assistance Force (ISAF) must commence a transition strategy with clear benchmarks to compel the Afghan Army to begin assuming a more prominent security role. Until the ANA is required to operationally do more, even the start of a meaningful U.S. troop withdrawal is off the table.

The scarcity of good ANA leaders prompts ISAF to maintain the dominant role. Officer accountability is uneven because of habitual cronyism and a fear of reprisal. To fix this problem, the ANA must institute a commissioning program for senior non commissioned officers (NCOs).

Many of these quality leaders are in their late 20s or early 30s and are ready to serve as captains or majors of units.

Further, we must insist the ANA address the stagnation of officers firmly entrenched in Kabul that breeds cronyism and lowers morale among the ranks.

Positive Steps
There is some hope, however.

Under the capable leadership of U.S. Army Lt. Gen. Bill Caldwell, now responsible for building both the ANA and the national police, the Afghan Army will grow to 171,000 by 2011, a significant expansion from today’s total of roughly 130,000.

And recent external assessments conclude that 46 of the ANA’s 82 combat battalions are capable of conducting independent operations.

Still, I caution against placing too much emphasis on units rated as “capable” that have yet to prove themselves in the field. Plus, what does capable actually mean to Afghans: Capable of defending the Afghan people, which they say they want, or capable of militarily defeating the Taliban, which the coalition seems to desire?

Given that Afghans in recent surveys conducted by Glevum Associates in three provinces (Kandahar, Helmand and Kunduz) described the Taliban as their “Afghan brothers” and overwhelmingly expressed a desire for a negotiated settlement, per haps the ANA simply needs to be capable of protecting Afghans and showing that the Taliban can not prevail.

After all, the realization that an insurgency cannot win is very of ten a key reason why they eventually come to the negotiating table. By that measure of success, significant elements of ANA are ready now for an expanded role. The rating system for Afghan units therefore needs an overhaul. Instead of a construct that focuses primarily on personnel numbers and equipment, ANA commanders should be graded on how well they establish and maintain stability within their as signed area, how secure the Afghan population feels in that area, and how much this success reduces Taliban intimidation of the population.

What Do the People Think?

We should start the transition to ANA operations by first listen ing to the Afghan people. Additional research by Glevum reveals key perceptions held by many Afghans, most notably widespread public confidence in the ANA as an institution and the desire for more Community Development Councils (CDC).

CDCs are comprised of elected village representatives who apply to the Afghan government (via the National Solidarity Program) for development projects. Be­cause CDC members are elected by local villages, many Afghans see the councils as a functioning form of local democracy. CDC’s have a good track record of successfully delivering projects that meet the needs of local Afghans.

A sense of community ownership inhibits corruption and maintains accountability.

Afghans also see corruption as the primary threat to their well being. Adequate jobs, basic services, education and even hope are scarce and under the thumb of what is largely perceived to be a corrupt and ineffective government. The Tal­iban, however, are often seen as incorruptible. It is no wonder then that in Kandahar, a Taliban stronghold, 97 percent of the 1,900 respondents interviewed expressed support for reconciliation with the Taliban.

We should assist the ANA in establishing a secure environment for fostering a rapid and broadly expanded CDC program. Projects should employ locals and deliver basic services, remembering that people vote with their stomachs.

Other research indicates some Afghan commanders recognize the urgent need to begin ANA transition by making it more responsible for modest amounts of terrain. As one of the more competent commanders told me during a recent visit to ANA fielded forces, “even if the security decreases once we take over, it is better to understand that now, while ISAF aid and support is still in Afghanistan, than when it’s just Afghans.” We must acknowledge that Afghan “good enough” is, in fact, good enough for our needs and take immediate and deliberate steps to begin transitioning security to the Afghan government by way of the Afghan National Army. Our successful exit strategy utterly depends on it.

By Jeff Haynes , vice president business development for Glevum Associates, Burlington, Mass., and a retired U.S. Marine Corps colonel. He served as commander of Regional Corps Advisor Command-Central in Afghanistan.
Posted by Andrew Lubin at 10:46 AM