Projecting Power in the 21st Century 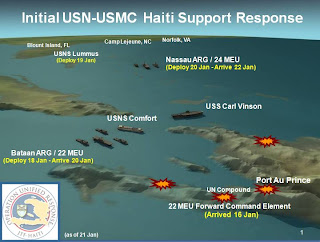 USS Bataan; Norfolk, Va. “An amphibious operation can be as prominent or as low-key as desired,” BrigGen Christopher Owens, USMC, said, “You’d be surprised to learn there have been 106 amphibious operations in the last 20 years, and only 2 were combat ops.” Owens, the 2nd Marine Expeditionary Brigade (MEB) Commanding General, is the co-commander, along with Rear Admiral Kevin Scott who commands Expeditionary Strike Group 2 (ESG-2), in overseeing Exercise Bold Alligator.

Bold Alligator is a seven day “virtual exercise” designed to reacquaint brigade and group level commands with their amphibious doctrine, tactical skill sets and logistical requirements. With the Marines and Navy landlocked after nine years fighting in Afghanistan and Iraq, the exercise is Marine Commandant Gen James Amos’s opening effort to return the Marine Corps to its expeditionary roots in concert with the Navy.

Comprised of 450 Marines and sailors spread over eight ships, the scenario combines a country invading its neighbor, an emergency evacuation of American and friendly civilians, and all of occurring in the midst a sudden onslaught of local sectarian violence. Bold Alligator provides realistic training as it is similar to situations that have occurred recently in many parts of the world. “It’s all taken from recent real-world situations,” explained LtCol Owen Richwine, who developed it. “Amphibious operations are far more complex than the Marines storming the beach at Tarawa. Think of this as a combination of Iraq invading Kuwait in 1991, the Shia-Sunni carnage in 2005-2006, and the Marines evacuating embassy personnel and civilians from Liberia in 1999.”

Such a complex mission requires the ability to respond rapidly, land and sustain a credible force ashore by both sea and air, all while organizing the evacuation of thousands of non-combatants including transportation to intermediate evacuation sites. These are capabilities that can only be provided by amphibious forces, with their unique blend of land-sea-air capabilities.

The simulation is complex; the 450 participants are controlling a virtual force of 11,000 Marines from a MEB and an ESG consisting of 20 ships (15 amphibious, 1 cruiser, 3 destroyers, 1 frigate) and supporting naval units including a Naval Beach Group, a Fleet Surgical Team, Maritime Expeditionary Security Forces, and a Tactical Air Control Group. In reality, the USS Bataan is the flagship, with the USS Iwo Jima and seven multiple simulation centers located from Norfolk to Camp Lejeune involved.

The virtual enemy is an accurate recreation of a robust 3rd-world army, with some 12,000 personnel, a mechanized division, and an assortment of tanks, artillery, and vehicles. Similar to Iraq, shadowy insurgent forces appear at inopportune moments, and through the course of each days events, Richwine’s Action Group threw different scenarios at the participants.

The importance of amphibious operations in the 21st century as led by ‘big decks’ such as the USS Bataan (LHD-5) can be assumed by the visit of Marine general officers and Navy Flag officers. Assistant Commandant Gen Joseph Dunford and Deputy Commandant, Combat Development LtGen George Flynn. They joined Vice Admiral Daniel Holloway, Commander, 2nd Fleet and Director-Combined Joint Operations, and Rear Admiral Dennis Fitzpatrick, Commander Strike Force Training-Atlantic. Dunford is long a believer in the multitude of options presented by amphibious operations. “We look at where we need to go in the future and we may need Marines to come from the sea," adding that future operations will vary from humanitarian and disaster relief to amphibious assault.

Prior actual amphibious operations have historically been small; when the 24th MEU pulled the American citizens off the Beirut beaches when the Israeli-Hezbollah war erupted, it involved only three ships. Even during the intense relief operations following the Haitian earthquake, the 22nd MEU, 24th MEU, and Navy relief forces operated autonomously, with only unofficial coordination between the commands. The goal of Bold Alligator is to coordinate the much larger MEB-ESG force for maximum efficiency in resolving the virtual crisis.

The most important difference between the multiple involved ships of Bold Alligator and humanitarian operations such as Haiti is the command structure. “We have a clear understanding of supported versus supporting roles,” Scott told Military.com, “We’re responsible for getting the Marines to the shore, and then they’re responsible from there.”

With the MEB-ESG forces comprising Bold Alligator far larger than the usual MEU, the MEB-ESG force is learning to fully utilize the strengths of 20 ships and 11,000 Marines. “This will enable us to develop the SOP a MEB-ESG requires” Richwine said. “Amphibious operations provide the United States the ability to conduct military operations, provide humanitarian aid, or pull Americans to safety; this is the best way of projecting power quickly and effectively."
Posted by Andrew Lubin at 8:23 AM