"Before the First Shots Are Fired"
By Gen Tony Zinni, USMC, ret, and Tony Klotz 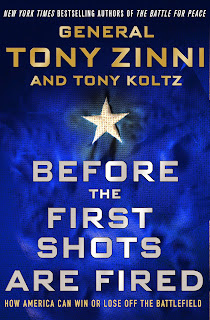 Today's foreign policy world seems like the bad old days of American indecision under Jimmy Carter; the Israel-Hamas war, Putin annexed the Crimea, President Obama's red-lines in Syria are repeatedly ignored, and the Americans killed in Iraq seem to have been sacrificed for a country whose people wanted democracy far less than the “Neocon's wanted it for them...clearly General Tony Zinni's USMC (ret) latest book, “Before the First Shot is Fired; How America can win or lose off the battlefield,” is being published at a most opportune time.


Writing with an honesty rare in Washington, D.C, “Before the First Shot” is Zinni's assessment of why America's foreign and military policy-making is ineffective, if not harmful, to America's national interests. In conjunction with co-author Tony Koltz, he discusses why the complex question “Are we warriors, peacekeepers, or liberators?” of Somalia, the Balkans, Afghanistan, Iraq, and beyond needs to be honestly discussed and answered when military actions are being considered.


A combat infantry officer in Vietnam, Zinni is no stranger to foreign policy's effects on the military. He finished his 40-year Marine career commanding Centcom, from where he led HA-DR missions into Somalia, worked with our NATO allies, and dealt with enough local potentates he was jokingly referred to as “America's Proconsul.” Whether 3rd or 4th Generation Warfare, Zinni's fought both, and the book is filled with real-time examples that validate his thoughts on how how America's foreign policy should best be implemented.


One of the biggest issues, Zinni writes, is that warfare has changed and neither the American military, the public, or the politicians understand how it has changed. It's the politicians inability to decide on America's role, coupled with a DoD who prefers to act on a huge scale or not at all, that is paralyzing America's foreign policy. As the many Marines who dealt with Mullahs, Elders, and gang leaders will confirm, it's a different battlefield than Tarawa, and the politicians need to realize the term 'bad guy' is relative. He equally faults the Pentagon; technology is a tool, not an end-state, and Zumwalt-class destroyers or forever-developing F-35's are not the weapons needed to keep small wars from becoming bigger.


But today's world, Zinni acknowledges, is vastly more complex than defeating the Axis powers; unlike beating the Japanese, the American people need to be convinced the war, or military action, is worth supporting – and it's up to the president to marry the mission to American interests. With technology enabling the media to beam video of gassed children and bleeding women worldwide, it's the president's role to decide if the situation is merely horrific or is of sufficient importance to justify America's involvement.


But unlike WW2, when America rallied to FDR; today's politicians fill the 24-hour news cycle in ways that often negatively impact American foreign policy-making. While the GOP routinely castigates President Obama for 'losing' Iraq, it's worth remembering the Iraqi's refused to sign a status of forces agreement – and by 2011, after 4,476 KIA and a trillion-plus dollars borrowed and spent on the war, the only support for continued American involvement came from a small group inside the Beltway.


Such constant negativity serves to weaken the president's ability to lead, Zinni argues, and serves to make future intervention's more difficult. As the lies and deliberate misinformation used by the Bush Administration “Neocons” to justify the war in 2003 came unraveled, it became more difficult to convince Americans of the need to intervene in other conflicts. Harriers over Syria three years ago might have given Assad second thoughts about gassing his fellow citizens. How ironic if those same lies used to justify the 2003 invasion halted an intervention in Syria that led to ISIS-ISIL's fracturing of Iraq.


Does a president need military experience to run a viable foreign policy, Zinni asks? Polio kept Franklin Roosevelt from serving, but he was Ass't Sect of the Navy under Woodrow Wilson and under his leadership the Allies won. Carter was a Naval officer, but missed or mishandled world events. Obama never served, yet picked Gen James Jones as his first National Security Advisor, hugely boosted the Marine presence in Afghanistan in 2009, sent Marines to Darwin as an integral part of his “Pacific Pivot,” and freely uses drones to kill those in Pakistan and Somalia who threaten American interests. It would seem the value of prior service depends on the individual.


A president needs an innate curiosity, Zinni says; one cannot be passive and disengaged when discussing the potential use of military force and it's follow-on effects. “Before the First Shot” makes an interesting comparison between Bush Jr, who served briefly in the Texas National Guard, and Clinton who accepted a student deferment during Vietnam. He castigates Bush (“the Decider”) as simply making decisions on the recommendations being presented by like-minded people, with Clinton, who Zinni believes 'got it right.'


Zinni credits Clinton for studying plans, grasping their complexities, and understanding where he might be needed to make critical decisions. Clinton also understood that his “OK” didn't mean he could then just stand back and watch; he had to follow events should he need to call an audible. Zinni also credits then-Sect of Defense William Cohen with building relationships between Clinton and the military, he and his fellow co-com commanders briefed Clinton several times annually; a far cry from “hyper-controlling secretaries like McNamara and Rumsfeld who limited the direct contact with generals and admirals. When that happens, presidential decisions suffer.”


Political leadership and the military commanders need to be synced, Zinni argues, as anything less ends in bloody and expensive disaster. “Before the First Shot” should be mandatory reading for every president and politician involved in the decision to send America's PFC's and LCPL's into harms way; our young men and women will give America their best – if only the politicians and bureaucrats would do the same.