The Lion's Gate, by Steven Pressfield 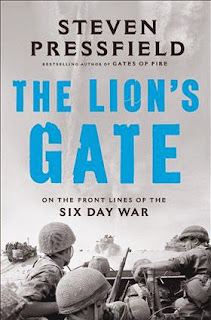 With his latest book, "The Lion's Gate," best-selling author Steven Pressfield has added yet another masterpiece to a body of work that includes "Gates of Fire", "The Afghan Campaign", and "The Legend of Bagger Vance."

Different than the historical fiction on which he's built his reputation, in "The Lion's Gate" Pressfield tackles recent history; in this case Israel's preemptive strike against the massing Arab armies in the June 1967 "6-Day War." His thorough research is what makes the book so good; in addition to the books, magazines, and news clips of the 6-Day Way he read, Pressfield also traveled to Israel and interviewed 63 veterans of the fight. Talking with infantrymen, fighter pilots, half-trackers, helicopter pilots, Pressfield gives the reader a vivid understanding of the odds Israel was facing as the armies of Egypt, Iraq, Syria, and Jordan gathered against the young country.

Most Marines today under the rank of Colonel were born after the June 1967 war, and while they may have studied Gen Ariel Sharon's brilliant advance across the Sinai Peninsula to the Suez Canal, few understand how tenuous was Israel's existence. Most Americans today associate Israel with an overwhelming combat supremacy, Bibi Natanyahu threatening a possible strike on Iran, or the ennui of never-ending Palestinian-Israeli bombings and counter-strikes.

But in 1967 Israel had been a country for only nineteen years and it's survival remained in doubt; the country was outnumbered 40-1, the Israeli Defense Forces were using WW2 leftover American M3 halftracks, surplus Patton and Centurian tanks, and in May, pro-Arab French President Charles DeGaulle reneged on his 1957 promise to support Israel. "This is 1967," he said, and cut off all arms shipments. More important, with Lyndon Johnson a lame-duck president mired in Vietnam, there was hope, but no guarantee of American military support.

In "Lion's Gate" the veterans Pressfield interviewed recount the massive odds they faced; the Egyptians had moved one thousand Soviet T-55 tanks to Israel's south, the Jordanians and Iraqi's were moving mechanized infantry, armor, and fighter squadrons to Israel's western border, and Syrian artillery was already shelling Israel from the north. When Egypt's President Nassar sent paratroops to seize Sharm-el-Shiekh and close the Gulf of Aqaba, the Arab world exploded in joy; dozens of thousands across North Africa and the Middle East demonstrated, screaming "Death to the Jews."

Pressfield, a former Marine infantryman, is a skilled researcher and historian. As the Israeli combat veterans talk about the sense of purpose they felt knowing if they failed, their wives and children would be slaughtered by the on-coming Arab hordes, Pressfield elicits such sobering stories of how the streets of Tel Aviv, Ashdod, and other cities were empty - all the city buses and even dairy trucks had been commandeered to carry the reservists. The call-up was so thorough, one veteran relates, that if the Egyptian Tupelov and Ilyushian bombers attacked the Israeli cities; there would be no one able to halt the cities from burning; both the fire trucks and firemen had been mobilized.

But what makes "The Lion's Gate" such a compelling story is how Pressfield wove the context of the survival of Israel into the veteran's boots-on-the-ground stories of El Arish, Jiradi Pass, and recapturing Jerusalem. In relating how Israel needed to fight and win both the near battle and the far battle, Pressfield uses Gen Moshe Dayan, to narrate why the war needed to be fought. But with Dayan dying in 1981, Pressfield reached out to Dayan's first wife, Ruth, and his daughter Yael, for insight into Dayan's thinking. "The only was to handle a bully," Dayan told Yael, "is to punch him in the face. Strike now, as soon as possible, and destroy him."

But as Marines, typically outnumbered but over-motivated, will understand, it's necessary to win decisively, and Pressfield digs out of Dayan's archives his quotes that "The enemy must be dealt such a blow that he will be deterred from striking again, for as long as possible...it must be the destruction of the Egyptian Army in a straight-up fight; tank against tank, man against man."

"The Lion's Gate" is one of Pressfield's finest books. In the backs-against-the-wall theme of "Gates's" Spartans at Thermopylae, Pressfield relates the true story of an entire country's courage while facing overwhelming odds. You won't put it down unfinished.