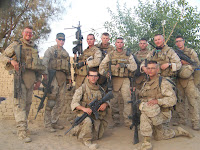 Gen. Stanley A. McChrystal's grim assessment of the Afghanistan war has opened a divide between the military, which is pushing for an early decision to send more troops, and civilian policymakers who are increasingly doubtful of an escalating nation-building effort.

Senior military officials emphasized Monday that McChrystal's conclusion that the U.S. effort in Afghanistan "will likely result in failure" without an urgent infusion of troops has been endorsed by the uniformed leadership. That includes Joint Chiefs of Staff Chairman Mike Mullen and Gen. David H. Petraeus, the head of U.S. Central Command and architect of the troop "surge" strategy widely seen as helping U.S. forces turn the corner in Iraq.

But before any decision is made, some of President Obama's civilian advisers have proposed looking at other, less costly options to address his primary goal of preventing al-Qaeda from reestablishing itself in Afghanistan. Those options include a redirection of U.S. efforts -- away from protecting the Afghan population and building the Afghan state and toward persuading the Taliban to stop fighting -- as well as an escalation of targeted attacks against al-Qaeda itself in Pakistan and elsewhere.

Obama's public remarks on Afghanistan indicate that he has begun to rethink the counterinsurgency strategy he set in motion six months ago, even as his generals have embraced it. The equation on the ground has changed markedly since his March announcement, with attacks by Taliban fighters showing greater sophistication, U.S. casualties rising, and the chances increasing that Afghanistan will be left with an illegitimate government after widespread fraud in recent presidential elections.

In television interviews Sunday, Obama said he would take his time in weighing McChrystal's recommendations and an anticipated formal request for more troops. "The first question is: Are we doing the right thing?" Obama said on CNN. "Are we pursuing the right strategy?"

The commander's report, administration officials said, is only one of many "inputs" the president is considering. Others include assessments from the State Department, the intelligence community and his White House advisers.

Few lawmakers had seen McChrystal's closely held report before an unclassified version was published by The Washington Post on its Web site Sunday night. Their reactions were sharply divided along party lines, with many Republicans advocating full support for the military commander.

House Minority Leader John A. Boehner (R-Ohio) said in a statement that he was "deeply troubled . . . by reports that the White House is delaying action on the General's request for more troops" and was questioning the "integrated civilian-military counterinsurgency" Obama himself set in motion. "It's time for the President to clarify where he stands on the strategy he has articulated," Boehner said, "because the longer we wait the more we put our troops at risk."

Senate Minority Leader Mitch McConnell (R-Ky.) said that "any failure to act decisively in response to General McChrystal's request could serve to undermine the other good decisions the president has made" on Afghanistan.

But Sen. John F. Kerry (D-Mass.), chairman of the Senate Foreign Relations Committee and a Navy veteran of Vietnam who once led opposition to that war, praised Obama's deliberative pace.

"All the president is saying is that he wants to take the time to make sure this decision is not done like the Gulf of Tonkin" resolution, where "underlying assumptions aren't questioned," Kerry said. The 1964 joint congressional resolution, based on false information about North Vietnamese actions and adopted amid an anti-communist frenzy, authorized President Lyndon B. Johnson to use military force in Southeast Asia.

"You've got to figure out . . . what is the counterinsurgency mission," Kerry said. "The president has all the right in the world to properly vet that mission and define it. It may well be we'll all decide [McChrystal] is absolutely correct, and the mission he's defined is correct."

Defense Secretary Robert M. Gates, who has positioned himself between the urgency expressed by military commanders and those calling for a reconsideration of the strategy, last week suggested that all involved take a "deep breath." He has told McChrystal to delay sending his formal request for additional resources until the policy discussion is further along.

But senior military officials have expressed growing frustration, while warning that delay could be costly. "Time does matter," said one military official. "The longer the situation deteriorates, the tougher to reclaim" the initiative against Taliban forces. Military and civilian officials agreed to discuss White House decision-making and McChrystal's report on the condition of anonymity.

This military official and others cautioned that any strategy revision that resulted in a pullback by U.S. and NATO forces would leave Taliban forces in uncontested control of territory and could lead to a return of civil war in Afghanistan, opening the door to reestablishment of al-Qaeda sanctuaries there.

But some civilian officials believe that such a scenario is based on possibly faulty assumptions about who the Taliban insurgents are, what their aims may be, and whether some can be co-opted. If Obama's core objective is to prevent al-Qaeda from returning to Afghanistan, this reasoning goes, it may not depend on defeating the Taliban. An equally viable policy, they argue, could include stepped-up, targeted attacks on al-Qaeda's sanctuaries in Pakistan and convincing amenable Taliban fighters that it is in their best interests to keep al-Qaeda out of Afghanistan.
Posted by Andrew Lubin at 7:51 AM