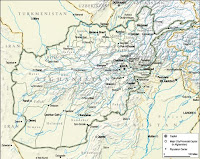 Wavering On Afghanistan?
President Obama seems to have forgotten his own arguments for a counterinsurgency campaign.

IT WAS ONLY last March 27 that President Obama outlined in a major speech what he called "a comprehensive new strategy for Afghanistan" that, he added, "marks the conclusion of a careful policy review." That strategy unambiguously stated that the United States would prevent the return of a Taliban government and "enhance the military, governance and economic capacity" of the country. We strongly supported the president's conclusion that those goals were essential to preventing another attack on the United States by al-Qaeda and its extremist allies.

So it was a little startling to hear Mr. Obama suggest in several televised interviews on Sunday that he had second thoughts. "We are in the process of working through that strategy," said on CNN." The first question is . . . are we pursuing the right strategy?" On NBC he said, "if supporting the Afghan national government and building capacity for their army and securing certain provinces advances that strategy" of defeating al-Qaeda, "then we'll move forward. But if it doesn't, then I'm not interested in just being in Afghanistan for the sake of being in Afghanistan."

The president's doubts come at a crucial moment. He has just received a report from the commander he appointed, Gen. Stanley A. McChrystal, saying the United States and its allies are in danger of losing the war if they do not work more effectively to shore up the Afghan government and army and protect the population from insurgents. Gen. McChrystal, along with his seniors in Washington, believe that this counterinsurgency strategy is the only route to success, and that it will require a commitment of substantial additional resources, including thousands more U.S. troops next year.

The generals believed they had Mr. Obama's commitment to their approach after the policy review last spring. Now the president appears to be distancing himself from his commanders -- including the chairman of the Joint Chiefs of Staff, Admiral Mike Mullen, who testified before Congress last week that more forces would be needed.

What has changed since March? As Mr. Obama noted, Afghanistan's presidential election has been plagued by allegations of fraud, sharpening questions about whether the government can be a reliable partner. Taliban attacks are spreading despite the deployment of 21,000 additional troops approved by the president earlier this year. Some in and outside the administration have argued for a more limited strategy centered on striking al-Qaeda's leaders, giving up the more ambitious political and economic tasks built into the counterinsurgency doctrine.

It's hard to see, however, how Mr. Obama can refute the analysis he offered last March. "If the Afghan government falls to the Taliban or allows al-Qaeda to go unchallenged," he said then, "that country will again be a base for terrorists who want to kill as many of our people as they possibly can." Afghanistan, he continued, "is inextricably linked to the future of its neighbor, Pakistan," where al-Qaeda and the Taliban now aim at seizing control of a state that possesses nuclear weapons. Moreover, Mr. Obama said, "a return to Taliban rule would condemn their country to brutal governance and the denial of basic human rights to the Afghan people- especially women and girls."

"To succeed, we and our friends and allies must reverse the Taliban's gains, and promote a more capable and accountable Afghan government," Mr. Obama concluded. As Gen. McChrystal's report makes very clear, keeping faith with that goal will require more troops, more resources and years of patience. Yet to break with it would both dishonor and endanger this country. As the president put it, "the world cannot afford the price that will come due if Afghanistan slides back into chaos."
Posted by Andrew Lubin at 7:43 AM